Skip to content
Home / Delve into the Depths in the Kobold Blog / Divine Favor: the Inquisitor 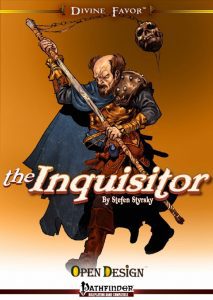 “When you told me you wished to ‘drop in on an old friend’ while we were in the city, I do not recall you ever mentioning that the ‘friend’ was the local arch-priest,” Benedict said to Jerika as they ran down the stone corridor, the temple guards behind them.

“Perhaps it slipped my mind,” said Jerika as she calmly scattered a handful of caltrops behind them.

“Indeed. Furthermore,” said Benedict as a spear struck the wall near his head, “I was amazed to learn that by ‘drop in on’ you meant ‘stab to death.’ ”

”The arch-priest was a vile heretic,” said Jerika, “notorious for leading the faithful astray with false teachings, and using them for his depraved pleasures. Our visit seemed an opportune time to discuss the matter with him.”

“And seeing that we are now being chased by his personal guard, why are we running deeper into the temple, rather than making an escape?”

“I have another friend to drop in on before we leave.”

While other divine character classes in the Pathfinder Roleplaying Game are busy healing, defending and supporting allies, the inquisitor is on the offensive, busting heads with ruthless efficiency and grim zeal. Divine Favor: the Inquisitor comes packed with new abilities, inquisitions, archetypes, feats and spells to make the most of this intriguing character.

Designed by Stefen Styrsky, Divine Favor: the Inquisitor is the fifth and final volume in the Divine Favor series that also covers druid, paladin, cleric, and oracle.

This 20-page volume begins with two new inquisitor abilities: censures and condemnations. Similar to lesser curses, they allow an inquisitor to bring the disapproval of her deity upon the heads of sinners and heretics. This section is followed by 11 new inquisitions including Balance, Darkness, Fire, Ice, Pestilence, Song, and Thunder.

Six new archetypes enable players to choose from a wide variety of classic character types, creating inquisitors who are dedicated to hunting down specific monster types, acting as divinely-powered slayers, or silently dispatching enemies from the shadows. There is even a penitent archetype for those who have renounced their role as inquisitor and seek to atone for the damage they’ve done.

Eight new spells are here to make life difficult for the enemies of the faith (or make undeath difficult, as the case may be.) Inquisitors can unleash powerful magics such as final rest, invisible hunter, nail foot and well of angry souls. Finally there are three new inquisitor feats that enhance the condemnation ability.

Pick up Divine Favor: the Inquisitor and become the terrible emissary of divine justice! And check out the other books in the Divine Favor series.

3 thoughts on “Divine Favor: the Inquisitor”