Skip to content
Home / Delve into the Depths in the Kobold Blog / Death’s Door: A Few Diseases More 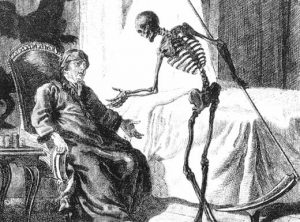 As promised in Kobold Quarterly  #12, here are more diseases to throw at unsuspecting adventurers.

Rusted metal of all sorts, from old sword blades to discarded nails, carries iron rot. The victim’s joints slowly stiffen until movement of any kind, even speech, is impossible…

Vectors The Kobold Ghetto is a breeding ground for iron rot. The traps guarding the underground warrens often transmit the disease to a person caught in their machinations. This makes it easy for the kobolds to apprehend trespassers, who are subsequently held for ransom or sold as slaves.

This disease travels on the blades of weapons. At first, sufferers feel a sense of elation, but this gradually leads to dreamlike illusions.

The target is cured.
< Initial Effect The target takes a -2 penalty to Will defense but also gains 10 temporary hp. Once the temporary hp are lost, roll an Endurance check to determine if the target enters the final state, otherwise roll as normal.
< > Final State The target must succeed a saving throw whenever it tries to take an action, or it loses that action.

Vectors The Mouse King has hit upon a brilliant plan to defeat rival gang The Great Hunters and their barghast leader—infect them with night’s delusions. All that is required are a few brave individuals willing to coat their weapons in the pestilence and attack them.

Stale tomb air and fouled water transmit the fugue. Those afflicted report waking up in places or circumstances in which they have no memory of entering.

Vectors The PCs find themselves in the bedchamber of a wealthy merchant, the man with a knife in his chest, and the estate’s guards banging at the door. The party must figure out how they got into this predicament, clearing themselves of murder.

Often thought to be the reaction of a sailor who has lost his mind after too many days at sea, this disease spreads through flea and tick bites and manifests anywhere those vermin are plentiful.

The target is cured.
< Initial Effect The target is dazed.
< > Final State The target is no longer dazed but makes basic melee attacks against the nearest creature for 1d6 rounds then falls unconscious (save ends).

Vectors An epidemic of sailor fever rips through Zobeck. No matter what measures the authorities take, the infection spreads, and the populace is grumbling about filthy bargemen contaminating the city. The bargemen’s guild master is eager to track down the disease’s source, which contrary to public opinion is a flee-infested sheep carcass in a trash heap outside a slaughterhouse.

Can I help you? Death you say. Oh, well… you have the wrong address. Yes, you want the next website over. No worries. Happens all the time. Take care.

Please, wash your hands before giving any comments below.