Skip to content
Home / Delve into the Depths in the Kobold Blog / Monday Monster: Blood Jackal 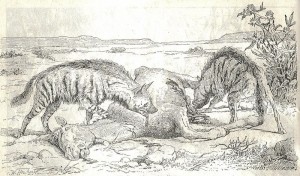 This creature looks like a large, emaciated jackal. Its blood-red skin stretches tight over its bones. Its eyes gleam with malevolent cunning, and blood drool drips from its fang-filled maw and fat, lolling tongue.

Blood jackals are vicious hunters and scavengers that creep across the desert at night in search of warm-blooded animals to feed upon. When they come upon sleeping or unsuspecting prey, they use their long, rasping tongues to pierce their victims’ bodies and drain them of blood. Fresh blood energizes the jackals, sending the cruel beasts into a raging frenzy, tearing apart flesh and bone with their powerful teeth…

TACTICS
Before Combat If possible, blood jackals attempt to sneak up on sleeping or unsuspecting prey and drain blood.

During Combat Blood jackals work together to attack and flank opponents. They attack first with their tongues, attempting to drain enough blood to go into a blood frenzy.

Morale Blood jackals normally flee if reduced to half their hp or if half their number have been slain or driven away. Once they have tasted blood and are in the throes of blood frenzy, however, blood jackals fight to the death.

SPECIAL ABILITIES
Anesthetic Saliva (Ex) A blood jackal’s tongue is coated with an anesthetic that numbs its victim’s body and prevents the victim from feeling pain. A creature struck by the blood jackal’s tongue outside of combat (such as while sleeping, or if surprised), must make a DC 14 Fortitude save or be unaware of the attack and subsequent blood drain. This ability has no effect in combat or if the victim is aware of the blood jackal. The save DC is Constitution-based.

Blood Frenzy (Su) A blood jackal that has dealt at least 4 points of Constitution damage from its blood drain ability goes into a blood frenzy, identical to a barbarian’s rage ability. The blood frenzy lasts for a number of rounds equal to 4 + the jackal’s Constitution modifier.

Blood jackals have sleek, emaciated bodies covered with short rust-red fur. They are about 4 ft. long and 3 ft. tall, and weigh only about 100 lb. When drunk on fresh blood, a jackal’s fur turns blood-red in color, and its body fills out, becoming more muscular.

While they prefer to drink blood, blood jackals also eat meat, including carrion. The longer they go without fresh blood, the more emaciated and sickly they appear; however, blood jackals can survive indefinitely without it. They get most of their water from blood as well, but they are incredibly efficient at retaining water, able to go for days without a drink of any kind.

Legend claims that blood jackals were created when a hyena rebuffed the depraved advances of a depraved god. Enraged at the snub, the god banished the hyena to the depths of the desert, cursing it to wander forever with a hunger for fresh blood burning in its belly. Whether or not this legend is true, blood jackals are constantly hungry and always on the lookout for fresh prey. In particularly lean times, they have been known to resort to cannibalism—even devouring their young.

Blood jackals roam across deserts in packs, seeking warm-blooded prey. They make their dens in rocky, secluded areas but range over wide areas of territory. Blood jackal packs invading another pack’s territory are driven off or killed and eaten if food is scarce.

Blood jackals hate other canines and kill any wolves, jackals, or hyenas they find in their territories. Some particularly bloodthirsty gnoll packs are known to keep blood jackals as pets and hunters.

Give us your thoughts, or we release the blood jackals.