Skip to content
Home / Delve into the Depths in the Kobold Blog / Dante’s Angeology: Aasimar Guides 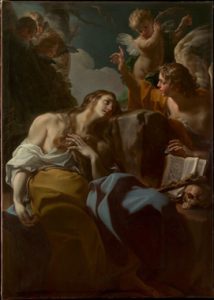 If you’re patient and lucky, you my someday bear witness to celestial guides. Pure and wise, they assist characters of aasimar lineage in a hidden crusade against evil. Though their guidance is always an indirect one, based on dreams and visions, they nevertheless assume a very important role in aasimar life. Two such guides are described by Dante Alighieri in Paradiso, the third part of his masterwork Divine Comedy.

Note: Guides normally do not provide in-games bonuses, but optional suggestions for GMs are provided for giving guides a more active role in your game.

“I was in the world a virgin sister, and if thy mind well regards,
my being more beautiful will not conceal me from thee;
but thou wilt recognize that I am Piccarda,
who, placed here with these other blessed Ones,
am blessed in the slowest sphere…”

Piccarda Donati is a blessed soul who, during mortal life, was a nun forced by her aristocratic brothers to leave the cloister to marry a noble for political reasons. Her inner self, however, never abandoned her spiritual vows and always considered herself married only to God.

When guiding aasimars, she leads them in lonely places in which the necessities of society and politics cannot interfere with the fight against evil.

In-game bonus: Aasimars guided by Piccarda are particularly well versed in prayers and rituals. When they choose the “Performing Sacred Rites” downtime activity, they gain inspiration at the start of each day for the next 1d12+2 days (instead of the usual 2d6 days).

“Mary, called on with loud cries, gave me;
and in your ancient Baptistery
I became at once a Christian and Cacciaguida. […]
Afterward I followed the emperor Conrad
and he belted me of his soldiery,
so much by good deeds did I come into his favor…”

One of Dante’s ancestors, Sir Cacciaguida was a valiant soldier granted the knighthood by Emperor Conrad for his bravery in battle. The poet put him in the Heaven of Mars, the part of Paradise in which all the blessed souls who directly battled evil during mortal life rest in peace.

The knight exhorts his tutored aasimars to fight evil creatures, especially fallen paladins and cultists, in the most direct and fastest possible way.

In-game bonus: Aasimars guided by Cacciaguida are particularly inclined to learn martial skills. When they choose the “Training” downtime activity, they can also gain proficiency in weapons (in addition to languages and tools). Training in any single weapon lasts for 250 days and costs 1 gp per day.