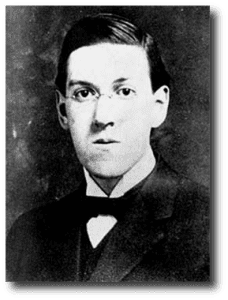 I just returned from the annual H. P. Lovecraft film festival in Portland, one of my favorite events of the year. As always, that event got me thinking (more than usual) about how the “Cthulhu mythos” can be incorporated into a fantasy RPG campaign.

The elder gods run into trouble when they collide with heroic fantasy. Mighty warriors and wizards battle supernatural horror all day, every day. What makes Tsathoqqua and Shub-Niggurath any more frightening than a lich or a dragon?

Heroic FRPG adventures tend to be framed in terms of good versus evil. Villains strive to bring about some earthly manifestation of evil—greed, violence, hate, destruction. In Lovecraft’s brand of horror, evil and good are largely irrelevant. Boiled down to essential salts, this type of tale relies on four tenets.

The cosmos is huge, and humanity is small. Humans and demihumans are big fish only in their laughably small pond. On the grand scale of existence, our spot is near the bottom. There are creatures so far beyond us and our gods in age, understanding, and power that the ant/human analogy fails. We at least notice ants and find them interesting. The gulf separating us from the top of the scale leaves us more akin to dust than to ants.

Gods are not what we think they are. The beings that mortals revere as deities in typical fantasy worlds are nothing of the sort. They are above us on the power scale, but they’re just more of the same in the grand order (or disorder) of the cosmos. No entity of any real consequence watches over or protects us; we are alone and defenseless against an uncaring universe.

Reality is beyond our comprehension. Reality extends far beyond what we perceive; our limited senses barely scrape its surface. Far from being a curse, this is a blessing in disguise, because the human mind is too small, weak, and primitive to safely embrace anything beyond the sliver of existence that it sees.

And yet . . . There are creatures with knowledge and perception superior to ours with whom we can interact. Under the right conditions, they can even teach us things, but what we learn probably won’t be to our benefit. It’s more likely that they see us only as obstacles, rivals, or tools.

How can those principles be worked into a fantasy setting where the monstrous and the supernatural are encountered on a regular basis?

Some of the monsters that adventurers clash with undoubtedly are among those creatures that have a fuller grasp of the universe’s true horror than we have. Mind flayers, beholders, liches, sorcerers, the drow, even dragons might have pushed their consciousness into realms that are better left alone. This should seldom play to their or anyone else’s ultimate benefit. There’s a reason why it’s called forbidden knowledge.

Even in a heroic campaign, cosmic horrors need to remain beyond mortal comprehension and beyond mortal power to defeat. Anything else removes them from the realm of cosmic horror. Characters armed with fireballs and vorpal swords should never triumph dramatically over creatures that supersede the laws of human magic.

Instead, heroes must claim their victories by defeating the earthly minions and servants of such creatures and thereby forestalling their plans, temporarily. Characters can kill a dragon or destroy a whole city of beholders, but they should never get the idea that they’ve beaten an elder being from beyond the spheres of thought. It’s always out there, waiting and hungry, unknowable and unkillable. Does it want revenge? Probably, but not in terms that we would understand.

Its servants, however, are an entirely different story.

Next week, I’ll consider ways to punish heroes for crossing swords with the unknowable other than scooping out their minds or popping them like bubble wrap.