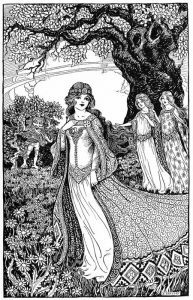 Have you ever wondered how normal people send letters in your fantasy setting? Noble lords have dedicated servants, and the government makes use of military messengers, but what about the butchers, blacksmiths, shipwrights, farmers, and hundreds of others? How do they send letters and packages to their loved ones?

Well, in your world, they could hand them over to the Wanderer’s Way.

What Is the Wanderer’s Way?

The Wanderers, as they’re called, serve a unique role in society. They’re one part volunteer postal service, and one part information network. Made up of traveling bards, circus acts, merchants, teamsters, and adventurers of all stripes, Wanderers are sometimes the only people keeping a region’s settlements connected to one another. This is especially true for remote villages, who may have no other lifeline to their neighbors.

Towns who welcome the Wanderers and their services will designate a local place as a Way Station, usually a tavern, and mark it with the Wanderer’s badge; the silhouette of a person with a walking staff. The same symbol is worn by Wanderers as a patch, or in some cases, as a cloak pin to identify them to fellow travelers. Anyone who wants to send a package or a letter can leave it at the Way Station, and when Wanderers arrive in town, that’s where they drop off their correspondence.

Why Would Someone Become a Wanderer?

The Wanderer’s Way, as an organization, grew out of established trade routes. While the merchants charged for postal services as a way to pad their strongbox, guards and drovers would often carry a letter or a present for the price of a few kind words. The practice grew, and spread, until it became a network of men and women all working together to help deliver the mail. Recruitment might have been helped along by popular songs and stories, particularly about Wanderers who were painted as daring, gallant figures selflessly delivering declarations of love on dark, stormy nights.

Wanderers come in all shapes and sizes. Young farmhands with a taste for adventure often volunteer as a way to get out of town for a night or two, for instance. Retired layabouts with nothing else to do may saddle up to ride to the next town, catching up on all the happenings while they drop off a message or two. Performers often take on the role of Wanderers to endear themselves to the public in whatever town they come to, and mercenaries on the hunt for a new paymaster often put on a Wanderer’s badge as a way to legitimize their presence in a town, and to make a good impression on the local lords and militia. Wanderers are folk heroes to some, and it’s not uncommon for people to take up their badge out of a desire to be valued, and to feel like they’re helping out their friends and neighbors.

It’s also important to note that, while the Wanderers aren’t paid, that doesn’t mean they’re never rewarded. Small town suspicion of outsiders is often set aside when someone bears a Wanderer’s badge, for example, and people will ask them for news, as well as about the contents of his or her satchel. It’s not uncommon for a Wanderer to be invited to a drink or a meal, and it’s rare to find a town that won’t, at least, offer a Wanderer a spot in the hayloft for the night. There are some stories, in fact, of men and women who have had to abandon their former lives, and who use their duties as Wanderers (along with the charity they receive) to get far, far away from the people they used to be.

The Wanderer’s Way in Your Game

The Wanderer’s Way is a fixture of society that can affect your game in a lot of different ways. If your adventurers are warming their feet by the fire in the local inn, and a Wanderer enters with rain dripping off her cloak, there might be a mysterious letter in her satchel for them—a letter that’s been through a dozen different hands, written by someone who couldn’t possibly have known the party would be in that particular inn on that particular night.

If your party needs to send word to their employers on the other side of the desert regarding their progress, the easiest way to do that is to put a letter into the hands of a Wanderer going the other way. If characters choose to take up the badge themselves, it might open all kinds of doors. On the one hand, they might make friends with the locals more easily. On the other hand, they might be targeted by enemies who think they’re carrying valuables, sent standard post on the sly by a clever noble trying to avoid attention.

The Wanderers can be as big or as small a part of your world and plot as you want them to be. But as long as they exist, there’s always a way for your adventurers to write home and tell their families about the crazy adventures they’re having.