Skip to content
Home / Delve into the Depths in the Kobold Blog / Born Heroic: A Player’s Guide to Childhood (Part 1 of 2) 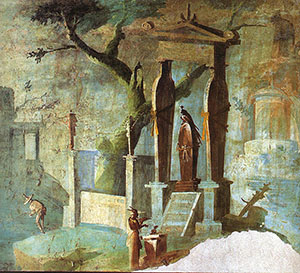 Not everyone opts to live the life of an adventurer. Some have no interest in seeing other kingdoms and no desire to explore dank dungeons for ancient riches. Others are too worried about highway bandits, goblin hordes, and marauding dragons to take the risk. Yet in every crowded city, bustling trade town, and backwoods village, some unruly kids look past the boundaries of their community and imagine a bigger world. It’s clear to everyone else that these children will fill the ranks of future adventurers, and nearly every current adventurer began as a child such as these.

This two-part series presents twelve types of children who turn to adventuring in adulthood. Growing up, your character might have been one of these types, and each description is meant to help you find your character’s own reasons for adventuring. These descriptions could also provide motivations for NPCs, or even describe the qualities of children encountered during the PCs’ many travels.

You’ve long been fascinated by magic. Sorcerers turning the tides of battles, wizards sealing wayward outsiders in magical prisons—these were your heroes. Your obsession culminated with the theft of some material components and a lot of gibberish words, the combination of which burned down half your house and left you seeing illusory myconids for the next month. But your fascination with magic didn’t end there, and you chased every opportunity to study these potent and unpredictable forces. Eventually you found opportunities leading to exotic places—the toppled towers of long-dead sorcerers, the wizard workshops of a distant metropolis, the planar gateways to other worlds—and you left to search for the magic you’ve always dreamed of harnessing.

You were only a child when marauders attacked and pillaged your community, yet you took up arms to defend your family. It might not have mattered—perhaps you were easily overwhelmed but spared death for your act of bravery. Or maybe it did matter, and you saved those dear to you. In either case, the experience taught you the necessity of martial skill, and you’ve committed yourself to combat ever since. Whether you are self-taught or academy-trained, whether you’ve served with a local militia or fought for money as a mercenary, you know the benefit of a strong offense and a calculated defense. Now you apply that skill wherever it is needed, the old memory of helplessness replaced by the confidence and bravado of a trained warrior.

Growing up, you were picked on and pushed around—always the subject of cruelty. You might have been smaller or younger than the other kids in your community, or you might have faced jealous siblings or a belligerent parent. Either way, your difficult youth helped make you tougher and more determined to prove your worth. You threw yourself into your studies—whether religious, arcane, martial, or otherwise—and swore to make yourself the very best you could be. After the opportunity to practice your trade took you far afield, you always thought back on your childhood bullies and imagined one day returning home, maybe to show them how successful you’ve become—or to make them pay for years of torment.

Even as a youngster, you recognized the unmistakable connection between the gods who birthed the world and the people who inhabited it. You reasoned that all races were indebted to the divine, and early on you dedicated yourself to working the will of the gods. You asked questions of the religious elders in your community, learned the intricate histories of the deities and their clergy, and explored their struggles and ambitions. You came to identify with one god in particular and swore to uphold that god’s strictures—or maybe you struck a bargain with the god, offering your dedication for a measure of divine power. Now, you use this power to spread the god’s ideals, neutralize the god’s enemies, and perhaps advance your own agenda.

You received formal instruction at an early age. You might have attended a religious school, learned from a strict private tutor, served as a page or squire in a noble household, or apprenticed with a notable spellcaster. In any case, many of your gifts and talents can be traced back to the lessons you learned in this highly structured environment. Your education helped mold you into an inquisitive adult who asks questions and seeks thorough answers. Whether you’re interested in tales from antiquity, religious artifacts, historical arms and armor, forgotten generals, or esoteric magical minutia, everyone knows that if the subject comes up, you’re the person to do the talking. And if you don’t have all the answers you need, you’re equally eager to join the expedition and uncover the information yourself.

About the Author: Jeffrey Gerretse is a writer in Southern California. He’s played D&D for more than 20 years, running the game for bands of would-be adventurers who began as children not unlike these.