Skip to content
Home / Delve into the Depths in the Kobold Blog / Relic: Danermind’s Fist 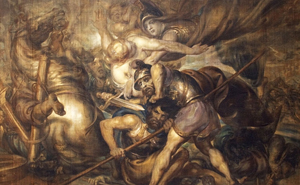 This grossly oversized fist-shaped gauntlet is a fused amalgamation of plates, spurs, gears, and rivets. It smells of grease and machinery.

Description
The artifact is a hulking, fist-shaped lump of mechanical adamantine components. The wearer is considered armed with a metal gauntlet. Because the fist is awkwardly oversized, the wielder has a –2 penalty to attack rolls. However, devotees of Danermind (see below) who can channel divine energy discover they can use it as easily as their own fists. Monks who dedicate themselves to the god receive similar grace.

The fist is a +4 adamantine holy construct bane gauntlet. It bypasses all hardness and has a base damage of 1d10 (x3). It grants the wearer a +4 divine bonus to Strength and Constitution. It provides an additional +5 divine bonus to break attempts against objects and to CMB attempts to sunder. The fist is particularly effective at punching through barriers—even magical ones. A magical barrier (such as wall of force) struck by the fist is affected as if by greater dispel (CL 20). Lastly, the wearer of the fist can assume elemental body (earth) II 1/day for 20 minutes and can use the fist to attack while transformed.

Lore
Knowledge (history)
DC 18: Long ago, Danermind, a mighty god of battle, fought an epic duel with a giant adamantine construct known as the Nine-Limbed Juggernaut. Danermind’s Fist is a relic of this battle.

DC 23: Unable to damage it with his weapon, Danermind punched the metal monster and tore a large chunk from it. His fist now encased in adamantine, he proceeded to pound the mechanical monstrosity to scrap.

DC 28: After the battle, he gave the fist to a favorite worshiper, Darunnar the Fearless. Darunnar used it to defeat the mighty artificer Kel-Kwoneen and his army of clockwork dragons in the battle of Barren Tor. Since then it has passed from hero to hero and in and out of history—often returning to the hands of Danermind’s most zealous followers. It is the nemesis of evil constructs and deals handily with barriers.

Knowledge (religion)
DC 18: Danermind is the god of battle and patron of elemental earth. Danermind’s Fist is one of his sacred relics and a mighty weapon.

DC 25: In the right hands, there is almost nothing it cannot damage, and evil constructs are particularly vulnerable to its power. Only devout followers of the god can wield the fist with ease.

DC 28: The wielder of Danermind’s Fist can punch through magical barriers and can also temporarily assume the rocky form of the god to wreak havoc.

Destruction
Danermind’s Fist can be destroyed only by casting it into the intense heat of the Forge of the Elder Smiths, a gigantic smelting complex in the heart of an active volcano. It was there the Nine-Limbed Juggernaut was constructed so long ago. Rumors claim, ageless titanic cyclopses still live and labor in the mountain.