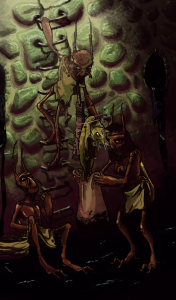 Skittish but hardy survivors within and beneath civilization’s centers of urban decay.

Chad and Josh collaborated on a roachling background that would allow players to play a roachling in their home AGE system game. Josh worked on the mechanics, and Chad helped with the storytelling portions of the background. Take a look to see how this particular creature works for the AGE system by peering beyond the jump. Additionally, you can revisit the 4th Edition Roachling blog entry by Chad Middleton.

Loathed, often unnoticed, and underestimated, roachlings scuttle in city alleys, subterranean systems, and hidden places. They glory in the refuse and waste of others and find many secrets lost and abandoned within it.

Roachlings have a blend of humanoid and insectile physical traits. Long, thin antennae protrude just below their hairline, replacing ears, and there is no visible nose. They have hard, multifaceted eyes and tough leathery skin with fine chitinous ridges at their joints and along their limbs; small spines grow along their arms and legs.

Males often have a small carapace covering their backs and abdomens and thick, fingerlike mandibles extending from either side of their upper lips like large mustaches. Female roachlings are often larger than males but have smaller mandibles, if any, and a carapace only along their backs. Roachlings tend toward dark skin and they have a shiny, oily appearance although they are dry to the touch. Roachlings reach physical maturity at 12 years and can live to be 80 years old.

Roachlings are skittish, but they are not cowards. Rather, they are practical. They understand that survival depends on their ability to remain unseen and out of reach of those who would kill them. As a result, most roachlings prefer to attack only when the chance for victory sits squarely on their side.

If you choose to play a Roachling Scuttler, modify your character as follows:

Add 1 to your Constitution ability. Roachlings possess an inner strength that has allowed them to survive and thrive on the margins of society.

Pick one of the following focuses: Constitution (Stamina) or Dexterity (Stealth)

You can speak and read the Trade Tongue.

Choose a class. You can play either a rogue or a warrior.

Roll twice on the following table for additional benefits. Roll 2d6 and add the dice together. If you get the same result twice, reroll until you get something different.

Like most squatters and dispossessed, roachlings lead a communal, seminomadic existence beneath the cities of other races, and their own culture is often a rougher reflection of the outcasts with whom they live. Roachlings take their opportunities when and where they can. For a chosen few, those opportunities find them instead.

The origin of the roachlings is shrouded in mystery. Some scholars believe that they were an agrarian race that did not resemble insects until they were uprooted by war and were left to die as refugees in the bowels of a strange land. There, they found the one creature who would answer their prayers: Akyishigal the Skittish One, who offered them survival in exchange for being reshaped in his image.

Long after their creation, this connection to their patron sometimes manifests with a distinctive appearance and unique talents. The roachling’s hair is always slick, pressed flat along the skull, and each one’s skin color varies from the average of their race. White, yellow, tan, black, and crimson colorations mark them. Power surges beneath their chitin and sets their path in life.

If you choose to play a Roachling Craniifer, modify your character as follows:

Add 1 to your Constitution ability. Roachlings possess an inner strength that has allowed them to survive and thrive on the margins of society.

Pick one of the following focuses: Constitution (Stamina) or Willpower (Self Discipline)

You can speak and read the Trade Tongue.

Roll twice on the following table for additional benefits. Roll 2d6 and add the dice together. If you get the same result twice, reroll until you get something different.

About the Authors
Chad Middleton, also known as Doomedpaladin, is long-term RPG nerd who has long dreamed of contributing to his favorite hobby. Now, thanks to Open Design, he lives that dream and puts his twitching antennae and filth-slicked mandibles (and mind) to work in these warm kobold ink mines.

After decades of playing all iterations of the Dungeons & Dragons game, Josh Jarman became enamored with the Dragon Age RPG by Green Ronin. He is the author of the Midgard Bestiary Vol. 1 for the AGE system, a Midgard patron, and a Kobold Quarterly Relics of Power finalist. Right now, he’s hard at work developing the AGE appendix for the Midgard campaign guide. You can follow Josh on twitter at @JoJa_rpg, or check out his woefully neglected website at joshjarman.net.

8 thoughts on “Roachling Background for the AGE System”