Skip to content
Home / Delve into the Depths in the Kobold Blog / Book Review: Angst 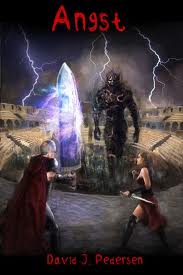 In the fantasy genre, turning forty is akin to a death sentence . . . well, it is young for a wizard or a sage, but for someone who aspired to be a knight, you might as well box them up and bury them deep. Angst wants to be remembered for his heroic deeds, not as an archivist working for the queen. Angst knows magic, which would be a good thing if magic wasn’t feared, regulated, and repressed. Just when Angst thinks he has hit bottom, he unexpectedly finds himself wielding an ancient intelligent sword in defense of one of his friends. The ability to wield this sword should make Angst a knight of the land, but instead it gets him involved in a complex plot by the queen designed to see him fail at every turn. In spite of the queen, her trusted advisors, and most importantly the odds, Angst sets out on this fool’s errand in search of adventure and glory and finds himself deeper in that “forty-year-old knight wannabe” hole than he ever could have dreamed. This is a formulaic book that somehow still manages to not feel conventional.

All of Angst’s traveling companions are just as you would expect them to be. The story progresses just as you would expect it to, and ends they way it should. Despite these factors, Pederson still manages to surprise and delight readers within the confines of what should feel like every other typical fantasy novel. Angst is an insufferable flirt and even seems to be able to hold the attention of ladies as a short, pudgy, balding forty-year-old guy. His desire to accomplish something heroic often overrides his logic, but more often than not his desire to rid the kingdom of this scourge of evil is motivated by his love of his wife and a misguided sense of doing the right thing. There were parts of this book where Pederson didn’t really answer questions that really needed to be answered and there were segments of the story that felt rushed. These hurried portions seemed rushed for the sake of the story, but with a little pacing this could have been avoided. Pederson wrote Angst in a modern voice that creates a comfortable, pleasant read that becomes ubiquitous but unobtrusive.

Angst is a well-written, entertaining novel that manages to be original even while it wraps itself in the typical fantasy formula. Pederson is a smart author who knows that the formula works for a reason and that even when you follow the recipe, you can still create something that will entertain readers. By the end of this book I wanted to know more about Angst and his motley crew but at the same time I felt like this story was complete. Those conflicted feelings are the sign of a good author who has provided a good story for readers . . . what more can we ask for?