Skip to content
Home / Delve into the Depths in the Kobold Blog / Been There, Dung That… 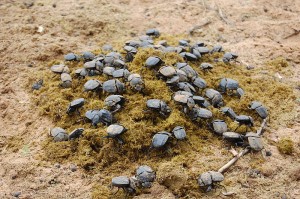 Tonaxian’s small group headed deeper into the caverns. He knew their query was close by the smell. The foul odor grew stronger as they crept quietly forward. From the front, a muffled curse burst forth from Kurlak, and the room bloomed with light to reveal Kurlak’s left leg buried knee deep in a pile of offal.

Unfortunately, the light also revealed the creature they hunted turning angrily toward them. Laugh or cry, it looked like they had truly stepped into it this time…

Funny thing is, you take a party into a dark, creature-infested cave system and everything is always, “Bones are picked bare if found. Dust coats the surfaces. Maybe some slimy mold or lichen on the wet walls.” But does that really cover it? Where does that cave troll leave its mess? Does a bear den have his and her bathrooms? Maybe the cleaning service takes care of it.

So let’s put on our gloves and really dig into this. The truth is, an animal or creature may not care if it poops where it lives. That leads to some interesting opportunities for humor and mishaps for any intrepid GM…

Ye Gods, the stench
First, there is the odor. The dire bear that just finished digesting the two dwarf scouts who trespassed in its caves isn’t going to look for the nearest restroom. A simple passage in or out may be where the action takes place, leaving an aromatic natural gift for the unwitting explorer.

Factors such as how old it is, what the creature’s diet includes, and how big it is can all influence the effluence. A strong odor might make members of the party nauseous or teary-eyed: consider a −1 penalty to initiative or, even, to attack rolls (Will DC 12 negates). Try focusing the next time you have a dry heave!

Second, consider the scat itself. Does anyone in the party have knowledge that might let them identify what left it? A ranger with Survival or a druid with Knowledge (nature) might with a few skill checks. Of course, this is if they see it before stepping in it. That opens up the possibility for a stink that follows the poor soul around for a while. A dwarf pounding into a pile 6 inches deep might even risk some inside the boot. The smell lingers for 2d4 turns or until washed off, imposing a −4 penalty to Stealth checks to anyone within 10 ft. of the impacted character.

Finally, there is always the chance encounter with the creatures that live on others’ waste. Why not a giant cavern dwelling dung beetle or your friendly mushrooms? Take a random event and add a random encounter. Just remember to keep a straight face while doing it…

These are the janitors of any cave system. Like their surface brethren, they are industrious and thorough. They are passive unless they or their eggs are threatened. They are roughly 1 ft. long with a dull black carapace.

SPECIAL ABILITIES
Noxious Cloud (Ex) When attacked or disturbed, the beetle releases a cloud of nauseating vapor with a 10-ft. radius (1/round). Those within the cloud take a −4 penalty to initiative and a −2 penalty to attack rolls (Fortitude DC 12; Constitution-based). The effect lasts as long as characters remain in the cloud and for 1d4−1 rounds after leaving the cloud.

7 thoughts on “Been There, Dung That…”