Skip to content
Home / Delve into the Depths in the Kobold Blog / The Laying on of Fists: Feats and Features for Battle Clerics and Paladins 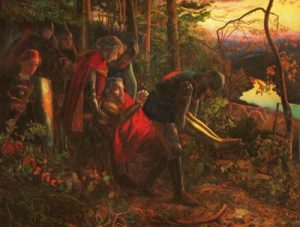 When the party is nose to smoking nose with an evil dragon or a fiend from the pit, they always turn to the clerics and paladins. These divine casters and combatants are, after all, geared toward fighting the forces of Evil (or Good, depending on alignment, and both with capital letters). But if you want to really explode with potential, it helps to choose the right feats and spells to deal maximum damage.

Paladins are the go-to class for bearding evil in its den. With their patented smite evil ability, they seem like an obvious choice. Before you go too far with this class, however, you have a number of good feat choices you should think about.

A paladin mounted on a charger is a rarely used option, but one that can be devastating in one-on-one combat. If you take a paladin variant like the Shining Knight variant (Advanced Player’s Guide, page 117), you get bonus abilities while mounted and it’s nearly impossible to knock you out of the saddle.

The Radiant Charge feat (Ultimate Magic, page 154) allows paladins to drop all their lay on hands into a single, damage-dealing strike. They get 1d6 per use of lay on hands used plus their Charisma modifier. You can choose to use this after you hit. If you combine this with Extra Lay on Hands (Pathfinder Roleplaying Game Core Rulebook, page 124) then you can build up quite a surplus of power. This may be used while mounted or while on foot against anyone you attack.

Clerics are the spiritual leaders of a group, and they serve as the group’s source of healing and of divine magic. Often seen as mobile buff and cure spells, a cleric can also bloody the other cheek with the right builds.

Channel Smite (Pathfinder Roleplaying Game Core Rulebook, page 119) and Greater Channel Smite (Ultimate Combat, page 102) allow clerics (and really anyone with Channel Energy) to add more damage to their melee attacks. With the Greater version, you have more control over which attack gets how much of that positive/negative energy.

If you’re playing a neutral cleric, then Versatile Channeler (Ultimate Magic, page 159) offers you some options. You may, every time you choose Channel Energy, select either positive or negative. You may wish to combine this with Selective Channeling (Pathfinder Roleplaying Game Core Rulebook, page 132) so that you can keep living or undead targets out of your channel.

The holy vindicator (Advanced Player’s Guide, page 263) is the best bet for holy warriors who want to take it to the next level. With heavy armor and shields, and the ability to increase defense and healing capabilities, the holy vindicator can wade right into evil hordes with sword arm swinging. They gain stigmata (which deals damage to both the Vindicator and to evil) and Channel Smite abilities, and their levels stack with other channel energy classes. It’s a solid bet for paladins on a power trip or clerics that don’t want to sit in the back row. You will need to take Alignment Channel (Pathfinder Roleplaying Game Core Rulebook, page 117) or Elemental Channel (Pathfinder Roleplaying Game Core Rulebook, page 122) to qualify for this prestige class, however, so keep it in mind.

Whether you’re a paladin or a cleric, most of your magic will not be focused on dealing direct damage. It’s the way of the world, but rather than complaining about it, you need to focus on what you are good at. And what you are good at is buffing and protecting.

Spells such as bless and protection from energy might not seem like much, but sometimes being able to walk through dragon fire or get that last +1 on an attack roll is what makes the real difference in a combat. Focus on spells that allow you to take away the enemy’s advantage, modify the battlefield, or let you and the party run straight through hell with smiles on your faces. And don’t be afraid to use scrolls for spells you won’t need often, or wands for ones that you’ll need a lot.

Also keep your domain spells in mind. Domains such as Fire and War are great for clerics that are mixing it up in the fray, but keep in mind that other powers, such as the granted ability of the Luck domain, can be more versatile.

3 thoughts on “The Laying on of Fists: Feats and Features for Battle Clerics and Paladins”