Skip to content
Home / Delve into the Depths in the Kobold Blog / From Shore to Sea: a Public Report 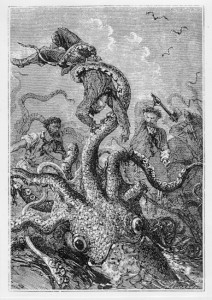 For those curious about Open Design’s current batch of patronage projects, KQ.com is releasing a series of public updates to track their progress. First of these, the Open Design/Paizo Publishing joint project From Shore to Sea, is in high gear.

Over the last 2 months, patrons have worked closely with author Brandon Hodge to produce an exceptional playtest draft of the adventure, which is currently in the hands of groups all over the country rolling dice and giving the numbers a workout. So far, it looks really solid, and the folks over at Paizo even took a sneak peek at the project to date and had some very encouraging words.

We’re excited to see the end result, but we’ve also turned our attention to the Sunken Empires sourcebook…

This companion piece plays off of some of the themes and settings presented in From Shore to Sea but is really acquiring a life of its own. Taking somewhat of a campaign setting approach, Sunken Empires will present a setting-neutral seaside community and use it as the backdrop for tons of sourcebook goodness.

Twin cities—one above the waves and one below—are built on the sunken ruins of an ancient lost civilization. On shore, landlubbers ply their trades among the bleached, ancient spires of the coastal city. At the same time, offshore ruins host merfolk communities, ambitious cults, and worse. The darkest secrets await in the cold depths, where the ancient ruins plunge off the continental shelf into the Underdeep and danger and intrigue await.

Here, adventurers come to learn the secret magics uncovered in the ruins with a chapter containing dozens of new spells, domains, and magic items. Players will have a chance to purchase barbed nets and gaff hooks from the “Dockside Equipment” chapter while learning new alternate class abilities suited to life at sea, new sorcerous bloodlines of the surf, and awesome feats of the waves. Of course, no sourcebook would be complete without a healthy platter of monsters, and we’re dredging up a school of new critters that will be washing up with the tide.

Best of all, we’re collaborating on all of this RIGHT NOW, and it isn’t too late to contribute. Sign up today and get in on the ground floor of Sunken Empires!