Skip to content
Home / Delve into the Depths in the Kobold Blog / Kobold Quarterly #21: Designing the Shaman 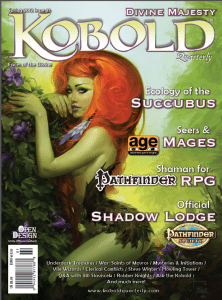 It’s all the oracle’s fault.

I’ve been playing a half-orc oracle of stone in one of our bi-weekly campaigns, and I’m having a blast. He is great fun to play. His various class features make him useful in lots of situations, and I’ve found I really like playing a spontaneous caster.

Don’t get me wrong—I’ve played and enjoyed TONS of prepared casters, going all the way back to 1st Edition AD&D magic-users in the late 70s and early 80s. Having said that, I have been playing mostly spontaneous casters lately and really digging it.

Although I fully understand that not everything in game design needs perfect symmetry, the lack of a spontaneous counterpart to the druid seemed to be something that needed to be rectified.

So, I got to work on what eventually became the shaman class featured in Kobold Quarterly #21. Like the sorcerer and oracle, the shaman only knows a few specific spells. However, he or she chooses them from the druid spell list and does not need to prepare them ahead of time. To balance this, the shaman gains a number of new class features (again, similar to the sorcerer and oracle). In fact, balance was something I was very keenly aware of during the entire design process.

In playtests, the shaman proved to be quite balanced, had plenty of chances to shine without overshadowing other classes, and generally was a blast to play! Can’t ask more than that from a class, can you? ☺