Skip to content
Home / Delve into the Depths in the Kobold Blog / Warlock’s Apprentice: A Grand Tour of the Eleven Hells 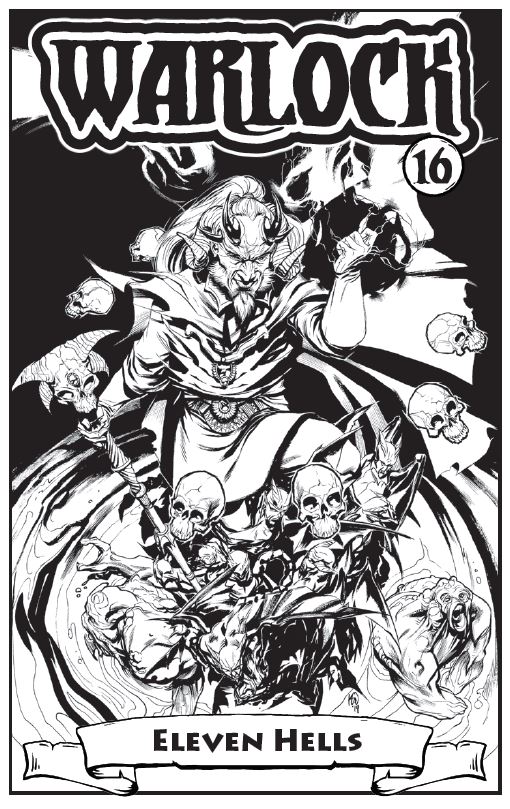 The Eleven Hells of Midgard are the least-visited, least-studied, and most-feared planes known to the mortal world, ranking in the realm of whispered horrors and extremely scanty documentation. Those who visit rarely recommend them.

Often confused with Evermaw (the divine realm of the gods of undeath) and the Yawning Void (a nightmare realm beyond mortal understanding), the Eleven Hells are the homes of demons, devils, and fiends of all kinds, and most are at least theoretically survivable by living visitors. They are ruled by dark forces inimical to those of good and light. While some might seem relatively benign on the surface, all contain horrors, and all are hostile to the goals of righteous folk.

Cosmology of the Infernal Planes

Some souls migrate over the River Lethe and down the Styx to the hells for punishment in the afterlife, but these planes are primarily realms given over to dark forces and purely malevolent creatures, which seek to corrupt, destroy, and conquer all realms. Their eternal war against the forces of the light is sporadic but persistent, and mortals who visit the Eleven will often find themselves drawn into this struggle by corruption, selfishness, ambition, or wrath. Thus do the hells turn all the multiverse to their corrupt purposes. Several of the hells themselves are known to send ambassadors to the mortal world, seeking closer ties. Evil nations such as Niemheim and Caelmarath both have (or had) deep connections to the hells, and their people frequently visit. Other wiser nations avoid any and all contact with the diabolical and the demonic.

Structurally, the Eleven Hells follow a progression from Urgennos (the most common entry to the Eleven as a whole) to Chundresh (the most difficult to reach from mortal lands or from Yggdrasil). However, this is not strictly a linear path: Urgennos and its fire connect directly to Efrizarr’s ice, Qes-al-Marit’s darkness, and the cold waters of Archedantuss and the Styx. No well-attested planar document describes all the connections between the Eleven Hells, though it seems clear that they are roughly ranked from easiest to enter to most difficult. The roads and gates between them are somehow controlled by the archdukes, dark gods, and demon lords who rule them; they are not dependent on ley lines or similar magic but on transdimensional arcane rites known primarily to fiends and certain trusted cultists.

Servants and Vassals Among the Hells

The inhabitants of the Eleven Hells are vast in number, and they include all known demons and devils, many tieflings, great apocalyptic heralds, and purely mercenary fiends and horrors who traverse the hells and make a fortune defending one warlord against another. Other evil races from ogres to derro and even the world-ending satarre (see Underworld Player’s Guide) can be found among the hells as well, at least in particular sites and cities.

While most reports of the hells emphasize the societies and people therein, it is worth noting that many bizarre and fiend-inflected plant and animal species exist and are unique to these planes. These range from the common sulfur rats and bluewing biting flies to necrotic mammoths, noxious hell weed and shambling brambles, tar melons, head-like ingattet, and bloodsucking thickets of various kinds. Leopard-spotted goats, murderous teal river pigs, and other familiar-yet-twisted species are found in every one of the hells, either feral or as domesticated animals.

Urgennos is a plane of choking smoke, sinuous rivers of lava and strangely dancing sky-rivers made of ash, and stony ground, teeming with peculiar fireweeds and black brambles. Clouds of noxious smoke often fill the air, and settlements are few and far between. The dominant life forms are the vast swarms of slintesh, also called sulfur rats, that devour both plants and the living. (For slintesh statistics, use wolves.) Alnaar demons, fire imps, and echo demons are all quite common as well, as are efreeti and malign fire elementals and salamanders.

The primary city of the plane is Ahtesseri, the City of Flowering Fire, known for its magma fountains and its exotic scents, perfumes, and metal works. Among its citizenry are barbed devils, salt devils, and gilded devils, and a large number of efreeti find the place congenial. Looming over the city and staffed with hundreds of barbed devils and fire imps is the Scarred Palace, a frequently blackened and occasional scarlet-painted monstrosity of turrets, heavy walls, and deep-dug barracks. This is the seat of power of Duchess Alsikaya, the Screeching Mother of Volcanoes, ruling the majority of Urgennos with her occasional consort and favored warlord, Mechuiti, Lord of Apes and Fire. Duchess Alsikaya is a babbling demonic creature of hideous stench, a round-faced and stringy-haired demon with some resemblance to a troll and covered in pustules that resemble small volcanic cinder cones.

Their rival on the plane is Camazotz, the Lord of Bats, who rules the rusted, stony Qëqboo Peaks and the seemingly infinite caverns of explosive gas and teeming insects beneath them. His various demonic hordes are often mistaken for swiftly flying clouds, and they strike and retreat with dizzying speed. Most of these are neophron or echo demons, though some are vrock, fire imps, wind demons, and even stranger species of demon. Camazotz seems to have no particular favorite abode, though the Ubintel Caverns see him often enough to maintain the Singing Shrine to his name, sometimes called the Cayin Shrine of Camazotz.

In addition, the demon lord Typhon, Lord of Monsters (see Creature Codex) lives in Urgennos, gathering an army of fiends to some purpose known only to itself. The mustering grounds are called the Brambles, a region of thorny execrable shrubs and devil boughs (see Creature Codex). The demon lord seems to have a vast store of coin and lemures to feed to demonic mercenaries, infernal troops, and stranger denizens of the planes. At some point, it is expected it will march against the Storm Court, Valhalla, or the Celestial Stairs…