Skip to content
Home / Delve into the Depths in the Kobold Blog / Character Theme: Knight of Giri (Part 1 of 2) 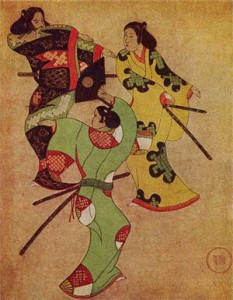 Honor is found in loyalty, courage, and sincerity of action. A knight of giri does not fear death—at least not death that is purposeful—so they do not fear battle. Instead these honorable men and women fear failing their superiors; their word is a bond that they will not break. That these knights never break promises is the common belief held about the honorable knights, but the truth is not always so glorious; even knights of giri stumble from time to time.

Giri is a code built on tenets of courage, duty, courtesy, and sincerity of action, developed hundreds of years ago in a remote part of the world. Since then the ideas have spread slowly until knights who follow the code can be found in the service of nobles across the world or training under older masters.

Due to their honor, knights of giri are often entrusted by the nobles they serve to act as their agents in matters of justice through the noble’s lands, thus putting them on the path to adventure. Others start on a life of adventure because they feel they did not uphold their code and seek to redeem their honor in their own eyes. Some leave a lord in protest while others are sent away because they failed in some way. Often the most dangerous knight of giri is one whose lord has died and now has started on a quest to avenge the deceased lord!

Prerequisite: You must have proficiency with rapier, longsword, or bastard sword. Although not all knights of giri use such blades as their primary weapons, they are always proficient with them and most use them as their weapon of choice.

Whether taught by a master or learned from bitter experience, you have turned belief in your own honor into a force that your enemies must contend with as your blows crash through their defenses.

Benefit: You gain the strength of honor power.

Through your actions, you have become known for your courage and sincerity. When you give your word to do something, it is rare that you do not accomplish it.

Benefit: You gain a +2 power bonus to Endurance and Diplomacy checks.

You no longer fear death, because it is more important that you achieve your goal or die trying. Fear of failure is stronger than any fear you might have had of death.