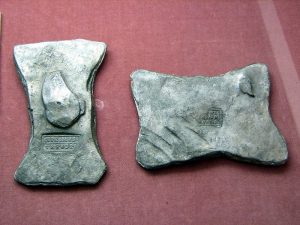 Remember when your character found his or her first platinum coin or that chest of 500 gold pieces? Then there were the hundreds of thousands of coins in the dragon’s hoard. At some point in your character’s career, coins become more of a problem than they are worth. Large numbers are difficult to transport, and a significant fraction of a coin’s weight could be lesser metals.

When large values of metal are needed for trade or crafting, something besides coins is essential. Ingots, quantities of nearly pure metal cast into a variety of shapes, are a common solution.

Rounded Weights and Dimensions: Weights and lengths are rounded to be easier to use in play.

Roughly rectangular or trapezoidal bricks are the most common form for ingots, and these bricks are created by pouring the molten metal into a mold. A standardized mold is better for a variety of reasons, including ease of use and transport, but a campaign setting might have variations in the molds to serve world-building purposes. A mark of the ingot’s purity, manufacturer, or ownership is sometimes stamped into the top. Ingots of denser, or more valuable, metals will tend to be smaller.

The value of an ingot is its weight in pounds multiplied by the value per pound of the metal. Table 1 shows the values of precious metals commonly found in fantasy settings.

Trade Bars: In civilized lands, copper and metals such as lead and tin are often poured into a common mold that is about 3 inches x 5 inches x 12 inches. These trade bars are used to transport and exchange metals for use in craft and industry. Trade bars of different metals will have different weights; a lead trade bar is 70 lbs., while a copper one is only 55 lbs.

Bullion: Bullion ingots are smaller than trade bars and are intended as currency rather than crafting. Because of this, bullion is measured by gp value instead of weight.

Bun Ingots: These squat cylinders, flat or slightly concave on one end and rounded on the other, are not unusual. This is because they can be made easily by pouring molten metals into depressions dug in sand.

Hacksilver: Perhaps the most expedient way to distribute loot is to take an axe and hack the jewelry, utensils, and other items into portions of equal weight. Historically Vikings left many hacksilver hoards behind and at least one Saxon “hackgold” hoard has been found.

Oxhide Ingots: These ingots get their name from their distinctive shape: They are large, flat rectangles with a “handle” sticking out of each corner, resembling a spread out ox skin. Researchers have speculated these handles make it easier for two or four people to carry the ingot. They could also offer lashing points to attach the ingot to a camel or donkey’s packsaddle.

Rods: The high melting point and small quantities of adamantine make traditional ingots impractical. Adamantine can be drawn into a thin rod that has a 1/8-inch diameter. Decorative finials are sometimes applied to the ends of the rod to show who owns it or to indicate from where it came.

Many of the above ingot types have a historical basis, though standardized trade bars and decorated rods of a rare metal are fictional creations. Table 2 shows some common fantasy ingots with their values, weights, and dimensions.

Given the convenience of ingots when dealing with big values, characters should see them in any large treasure hoard. This is particularly true of treasure collected from merchant caravans or trade ships. Even humanoid tribes will hack looted jewelry up to allocate shares or melt it down into crude buns for bartering.

Characters with metalworking skills could readily buy the material they need. In contrast, those characters with magic item creation feats will need to acquire rare and expensive metals. These metals are available only in cities where you can buy magic items that are worth the cost of one pound of the metal. As a result, characters may have to travel to a larger city or go on specific adventures to acquire the raw materials for their latest project.

It is possible to cheat and make ingots out of alloys or use a core of a lesser metal. Anyone trading in improper ingots would have to be stopped. Additionally, the characters might get annoyed if the creation of an expensive magic item failed because the mithral they used wasn’t pure.

Further, don’t forget mines aren’t the only source of metal in a fantasy setting. Melting the coins from a dragon’s hoard into bullion not only reduces the weight by 20%, it would also help mask where it came from in the first place. A small boomtown might even spring up around the entrance to a particularly large hoard, as the gold and silver are carted out and processed for trade.

8 thoughts on “Treasure by the Pound”