Skip to content
Home / Delve into the Depths in the Kobold Blog / Sand Giants: Raiders of the Lost City 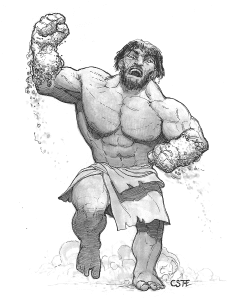 The Lost City adventure introduces a new encounter for adventurers who brave the harsh environment of the desert: the warlike sand giants. In this sneak peek at Logan Bonner’s new adventure for 4th Edition D&D, we offer two of these titanic foes for your use at the table.

The sand giants were once closely allied with their cousins, the efreet. The efreet and sand giants proudly served their primordial masters for many eons, but the vain efreet lords eventually shamed the giants to gain their masters’ favor. The disgraced and enraged sand giants left the Elemental Chaos for the mortal world, led by their first tribal chieftain, Azhad al-Hani. Determined to serve no master but themselves, the sand giants found solace in the turbulent sandstorms and scorching dunes of the desert.

Shock Tactics: Sand giants prefer shock tactics and sudden ambushes. They often conceal themselves beneath sand drifts and burst forth when caravans and other travelers approach. Survivors of their onslaught are chained and forced to toil in their fortified strongholds beneath the dunes.

Masters of the Dunes: All sand giants have the natural ability to blast their enemies with gouts of hot air and sand that can blind and disorient. The most powerful among them have become so attuned to their surroundings that they can manipulate the ocean of sand around them like a weapon and even transform portions of their bodies into sand.

A Hot Box – Encounter
Attack: Area burst 3 within 20 (creatures in burst); +21 vs. Reflex
Hit: 3d8 + 10 fire damage
Effect: The burst creates a zone that lasts until the end of the encounter. Any creature that enters the zone or starts its turn there takes 10 fire damage.

Dozens of other new monsters populate the Lost City, ready for you to surprise your players, so pick up your copy of the complete adventure in print or PDF today!

5 thoughts on “Sand Giants: Raiders of the Lost City”