Skip to content
Home / Delve into the Depths in the Kobold Blog / To Infinity…. And Beyond! 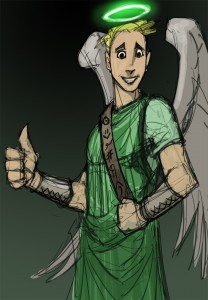 All packed? Got some silver and cold iron weapons? Forked metal rods ready for planeshift? Written your will and kissed your loved ones goodbye? Great. Hold on tight and let’s go!

Thanks to the legion of eager planar explorers that have signed up, the mighty Angel of Commission has swooped in to bless Dark Roads & Golden Hells. Ladies and gentlemen, we have the greenlight and our trip into the firmament is officially underway!

As the first elements of design, we’ll be diving straight into monsters for our bedevilling bestiary and then addressing cosmological crunch of all kinds – both for Midgard and a general smorgasbord of planes and planar options. The project thread of fantastic locations is brimming with awesome places to see before you die (and some you only see after you die…) and the general brainstorm already has enough great ideas to fill gamer heaven three times over – but there’s always room for more! In a few weeks, intrepid senior patrons will be pitching and writing their very own corner of Midgard’s outer planes. Why not head over to the Kobold store and join them right at the starting gate?

Since its Monday let’s finish with a monster: Hail the Angels of Commission!

Creatures with the Angel of Commission template live in a small corner of heaven visited by Open Design freelancers (who are otherwise consigned to limbo regardless of alignment). They can be summoned using spells such as summon monster and planar ally, but can also be found rescuing grammatical errors from devil lord Titivillus and in Zobeck assisting the kobold king with the Sisyphean task of sorting his slush pile for Kobold Quarterly.

Rebuild Rules
You can’t add this template to an Outsider whose home plane is Development Hell. An angel of commission’s quick and rebuild rules are the same:

Senses gains demarkvision 60 ft. (allowing it to automatically spot when a project has the required support)
Special Abilities At-Will: Detect Patron, Light (green only). The creature also gets a +5 sacred bonus to Diplomacy checks to convince overconfident freelancers that they really should be working on something more sensible than this right now.
Special Attacks smite doubter 1/day as a swift action.

4e angels of commission gain the following power as a Standard Action:

[M] MAKE PUBLISHER HAPPY (Charm) • ENCOUNTER
Requirement: Target must be a publisher
Attack: Melee 1 (one creature); level +4 vs Will
Hit: Target becomes happy (save ends). Whenever the publisher is made happy, their bank manager automatically also becomes happy until the end of their next turn.

What’s the Pathfinder RPG equivalent? We’ll see on the patron forums! Congrats to everyone who made helped fund this project, now we’re off to design it!

3 thoughts on “To Infinity…. And Beyond!”