Skip to content
Home / Delve into the Depths in the Kobold Blog / Howling Tower: Rise of the Miniature 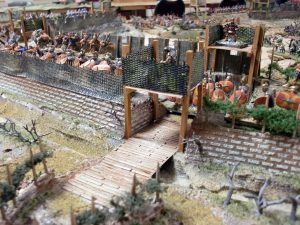 It’s a piece of RPG legend that D&D arose from wargaming. Although that’s true, it’s a case of something not really meaning what people think it means. A more accurate statement would be that D&D arose not from wargames but from wargamers. After all, the magical spark at the core of D&D is that it wasn’t just another wargame; it was a little of this and a little of that rearranged into something startlingly new and different.

But the inventors and early adopters of D&D were steeped in wargaming ideas, and they left a strong imprint on the game. Typically, this influence gets simplified to the most recognizable of the wargamers’ tools—miniatures—yet miniature figures are probably the least of the ways in which wargaming influenced RPGs. Early editions of D&D stated clearly that the game didn’t need miniatures at all. That was an important declaration, because rules for miniature wargames are what TSR published in the early 1970s. Anyone who bought a rulebook from TSR expected it to be for and about miniatures; hence the need to be up front about what people were buying.

It’s curious, then, that the use of miniatures in D&D and its offshoots reached an apex here in the 21st Century. After being almost entirely written out of the game in 2nd Edition, minis came back with a fury in 3E and 4E. Some people love that 3-D emphasis and some hate it, with pretty much the same fervor displayed in religion and politics.

It’s fair to ask, then, what purpose miniatures really serve in D&D. Are RPGs made better or worse by little plastic or metal heroes and villains?

Miniatures serve four purposes: they’re eye candy, they improve spatial clarity, they add an element of familiarity, and they make a specific type of play possible that wouldn’t be possible without them.

Wow, nice figures. Did you paint them yourself? This is the most obvious bonus from using miniatures; they’re fun to look at and to play with. People like having toys to fiddle with at the table besides dice, pencils, and erasers.

If Maximinius stands 3 feet to the left, the next fireball will juuuust miss him. Regardless of how exacting your DM is about floor plans and spacing, knowing who’s inside the fireball’s 20-foot radius is important. Miniatures can prevent a host of arguments and save countless PCs from electrocution by companions who target their lightning bolts with less care than safety demands. If you like to see where things are in relation to other things, then miniatures are a great boon.

Oh, I get it. We move these pieces around. Roleplaying is a strange concept to wrap your head around. A new player’s first session can be disorienting without something familiar to grab onto. Moving pieces on a board is familiar; that’s what games are about, right? This advantage fades for most people once they grok the R in RPG, but for some, the board game aspect provided by miniatures is as much a part of D&D as are funny dice and Mountain Dew. It all depends on when and how you first grew to love the game.

Oh, I get it. We need to move these pieces around. 3E and 4E ushered in a style of play that demands miniatures. You can argue, as some have, that this returns D&D to its wargaming roots. That argument is a tough sell considering all those statements in the first 20 years’ worth of Dungeons & Dragons rulebooks that miniatures are unnecessary. No, relying on miniatures to the point where their use is all but mandatory is a relatively recent development in D&D. That doesn’t make it a bad thing, unless you’re an OD&D originalist. By pushing miniatures around on a grid, you can achieve a degree of tactical precision way beyond what’s possible with imagination alone. It’s not to everyone’s liking, as the Great Edition War continues to hammer home. But for cats who dig it, this style of play is their pajamas.

Which leaves us with our question: Are RPGs made better or worse by little plastic or metal heroes and villains?

The answer is, yes, they are. Often at the same time, at the same table. Personally, I like them … in moderation. Coming from someone who’s painted thousands of the little things and owns many thousands more, my “moderation” might not be the same as yours, but the sentiment stands. When they amplify the game, miniatures are terrific. When they become the game or interfere with imagination, they’re terrible. The trick is knowing the difference.

Where does your group draw the line?

P.S. If D&D’s wargaming roots interest you, check out Jon Peterson’s history of D&D, Playing at the World. Also, the photo features Philip J. Viverito’s “Siege of Alesia” game at Cold Wars 2010, which used Phil’s rules Classical Hack. You can learn more about this game at Board Game Geek.

11 thoughts on “Howling Tower: Rise of the Miniature”