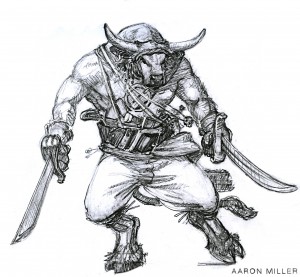 In our fifth installment we hoist anchor and set sail for Triolo, where we’ll find a mighty lord of the high seas and one of Midgard’s most colorful heroes…

The first minotaur to serve as First Duke-Admiral of Triolo, Cadua is a polarizing figure. Some consider the “Golden Horn” a promising sign of Kyprion’s and Triolo’s joint destiny. Others feel sure that he steers the Maritime Republic to ruin.

“My lord, I will accept your surrender or send you and your fleet to the hell of your choosing. I suggest you decide quickly.”

In Triolo, at the Ducal Manor or in the Forum of the Golden Council.

The Golden Council of merchant families governs Triolo, but much of its policy is in the hands of the commanders of its fleet. They are led by the First Duke-Admiral, whom the Council elects to serve for life or until he or she abdicates the position.

First Duke-Admiral Cadua inspires loyalty in his followers, fear in his foes, and respect in all. His appearance alone astonishes those who are not prepared for it: a minotaur dressed in an admiral’s finery, with one horn replaced by a horn of gold, one hand replaced by a seaman’s hook, and one eye covered by an embroidered patch.

Failure, injury and even death hold no terror for the First Duke-Admiral: he has been through the fire and emerged victorious. Now he leads his people and his fleet with sharp intelligence, courage and hard-won wisdom.  Cadua faces adversity in all its forms with a wry humor and fierce determination.

There are plenty of opportunities for adventure, fortune and glory with Triolo’s legendary corsairs. The First Duke-Admiral doesn’t shy away from piracy, but he will not tolerate cowardice, treachery or needless cruelty in those who serve with him. Success in a mission sponsored by the First Duke-Admiral will earn you a free drink in many a seaside tavern. It will also make you extremely unpopular with those who’ve lost ships to the corsairs.

The “Golden Horn” and the Bear King share a great mutual respect and affection. The First Duke-Admiral and Zobeck’s Free City Council are sometimes rivals in trade, and sometimes allies against those who would halt or oppress the hard-working merchant-pirate classes.

The Sultana’s Mharoti Empire is the only sea power formidable enough to contest Triolo’s dominance of the waves; and the Oracle of Kammae and the First Duke-Admiral maintain a long-standing feud over the enslavement of the sea god Nethus. The hatred between the First Duke-Admiral and the Glittering King goes well beyond the rivalry between their nations: their final duel, whether it’s ship to ship or blade versus blade, will be legendary.

As an impetuous youth, Captain Cadua led several Triolan ships into a Mharoti trap and barely escaped with his scars. Shamed, he was told he would never command a ship again, since he lacked the wisdom to lead.

Cadua left Triolo to find that wisdom, and he did, for a terrible price. He visited each oracle across the length and breadth of the land. To the Clockwork Oracle, he lost a horn; to the God-Slavers of Kammae, he gave an eye; and to the Spider Oracle of the Southlands, he sacrificed a hand in exchange for insight.

A scant five years later, Cadua returned to Triolo, burning with the faith of Mavros and leading a score of ships. The people of Triolo, even his detractors, acclaim him as the first and greatest of the minotaurs, and they acknowledge his potential to lead his people into the highest ranks of Triolo’s navy and society.

Everything will be all right as long as the First Duke-Admiral’s wisdom does not desert him, leading the Maritime Republic to disaster and giving the Mharoti Empire command of the seas.