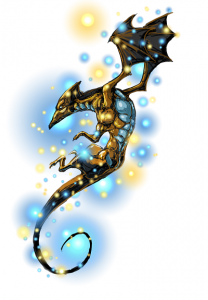 Oftentimes, a drake’s curiosity about the world around it drives the creature to seek out experiences beyond the physical realms. The drake finds companions with which it experiences the wonders of the multiverse. It returns from its travels with a changed appearance, demeanor, and powers. Regardless of which type of drake embarked on its planar journey, the creature always returns as a star drake…

SPECIAL ABILITIES
Nimbus of Stars (Su) A star drake has a continual supply of tiny motes which surround its body. Any non-blind creatures within 10 ft. of the drake must succeed at a Fortitude save or become dazed. Those who succeed are still dazzled by the nimbus. These effects last while the creature is within the aura and an additional round after the creature leaves.

Searing Star(Su) Once every 10 rounds, a star drake can gather up energy from its nimbus, reducing its effective range to 5 ft., to create a powerful globe of energy. By succeeding at a ranged touch attack, the drake strikes an opponent with the globe, which explodes for 6d8 force damage and blinds the target (a DC 24 Fortitude saving throw prevents the blindness, but not the damage). Against outsiders without the native subtype, the damage increases to 18d8.

A star drake takes on a typically draconic appearance, differing from true dragons primarily by its mottled metallic scales (usually silver and gold in varying patterns) and the nimbus of tiny stars surrounding the entirety of its body. As the drake requires it, numerous stars making up its nimbus gather into a large ball to strike an opponent. Subtle signs give an observant viewer a clue as to the originating drake stock, such as horn or tail shape. A star drake generally measures 10 ft. in length, and it weighs roughly 500 lb. The drake also gains a prodigious lifespan, with the oldest known specimens reaching a millennium in age.

Due to its experiences across the planes, a star drake takes on the mantle of protector of the Material Plane. No matter what alignment a creature professes to have, the star drake sees it as a meddler in the affairs of humanoid races. In the drake’s mind, an angel presents as much of a threat as a devil, especially when the outsiders decide to take their battles to a “neutral” site and deal all sorts of collateral damage. Depending on the outsider in question, the drake attempts to negotiate with it, drive it off, or destroy it. Occasionally, the drake leads an incursion of its own, with other star drakes or like-minded adventurers, to clearly make the point it does not welcome extraplanar predators.

No one is certain about natural-born star drakes. Every such drake has transformed from an existing drake. Certainly, no creature has ever spoken about its transformation, but its former companions describe a process where the drake incorporates the essence of the plane it travels in. The drake always seems to absorb energy from various planes, whether ambient or shed from visiting outsiders. As a drake ages, its nimbus grows ever brighter and more powerful, to the point the creatures must depart their home worlds for the firmament. There, sages speculate, they add to the tapestry of the night sky and perhaps form the basis of a new system of planets.