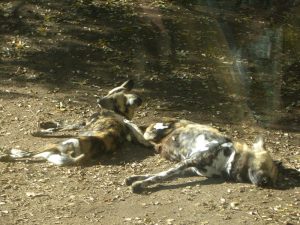 This doglike predator is covered in a jigsaw of thick brown scars. Three razored tusks jut from its lower jaw. With an ungodly thunder crack, the creature shreds itself into two identical beasts, each swiftly loping forward to encircle its prey. Then each beast divides again…

The homely splicer beast can tear itself into duplicates, creating a pack of cunning hunters where there was once a single beast. While otherwise mechanically equivalent to a CR 2 monster, given time, the splicer beast’s ability to duplicate itself enables it to quickly reach much higher levels of challenge…

Superior Flanking (Ex) When a splicer beast or one of its splices flanks a target it gains a +4 flanking bonus to hit instead of +2.

Splicer beasts are ill-tempered loners, each preferring the company of its self-created pack to others of its kind. When two splicer beasts meet, they battle over territory, often warring for days, littering the ground with the corpses of their splices. With an animal-like intellect, splicer beasts have no language, communicating their dominant expressions through scents and guttural snorts. Splicer beasts are asexual: every few years one of its splices spontaneously becomes its own creature. The new beast must retreat before its sire recognizes it as a threat to its territory and turns on it.

Splicer beasts roam large swaths of territory. Like most canines, splicer beasts mark their boundaries with urine. A splicer beast often hunts creatures much larger than itself, using its splice ability and its endless patience to wear its foe down over a series of days or even weeks.

Where available, splicer beasts lair in shallow caves, often splicing to its full pack size before falling asleep. The teeming bodies warm its shelter and provide temporary protection while it drifts off to sleep.

A splicer beast uses its scent ability to track prey for hours before sneaking close enough to ambush a target. If possible, it will splice during a surprise round. Once engaged it splices as a standard action and then uses its remaining move action to circle around behind its opponent for flanking opportunities.

Because its splice ability makes it so difficult to slay, splicer beasts are nearly fearless. However, the creature is cunning enough to recognize the threat posed by area effects. As a result, it avoids dragons of all types and is intimidated by humanoid spellcasters who wield wide-area magic, such as fireball.

The 11-chambered heart of the splicer beast is valued for its inexplicable regenerative properties. Whenever a brewer incorporates the heart of an original splicer beast into the brewing of a healing potion of any strength, the potion is empowered, as per the metamagic feat. Usable only once, a splicer beast heart typically fetches up to 100 gp on the open market.