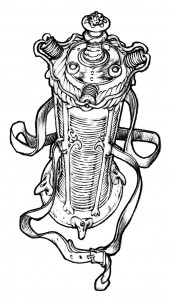 Whether several fathoms below the waves or enjoying some shore leave, these spells offer a wide range of utility and destruction…

The target takes 1d6 cold damage/2 caster levels (maximum 5d6) and 1 point of Constitution damage/4 caster levels (maximum 3). On a successful save, the target takes no damage of either type but finds itself shaking violently due to the sudden cold, gaining the staggered condition for 1 round. Whether the save is successful or not, the target loses its grip on any one held object, determined randomly. Targets immune to cold are immune to all effects.

You force target to take on the chaotic, formless substance of the world’s first ocean, losing corporeal integrity and shape. While under the spell’s effect, creatures lose all natural armor bonuses and natural attack forms, have their movement reduced to 1/4 normal speed, suffer -4 penalties to Strength and Dexterity, and take a -4 penalty on all attacks and skill checks. In addition, the slow dissolving of the victim’s body deals 1d6 damage/2 caster levels/round.

You empower an ioun stone, including a dull gray, burned-out stone, to function as a short-range weapon. For the duration of the effect, the stone orbits your head as normal, and you may direct it to make ranged touch attacks against foes within range. On a hit, the stone deals 1d8 bludgeoning damage +1/3 caster levels (maximum +5 at 15th level). It strikes with your base attack bonus (possibly allowing it multiple attacks per round if your BAB warrants it), plus your relevant ability modifier (Intelligence for wizards, Charisma for sorcerers). The enchanted stone is considered magic for purposes of overcoming DR. After each attack, the stone returns to you and orbits your head, ready to make further attacks until the duration expires. Active ioun stones do not impart any abilities on rounds they are used to make attacks.

Whether cast above water or below the churning sea, this spell causes an unearthly wave to undulate from the caster disfiguring and maiming all creatures in the spell’s area with an abrasive and lashing force. This deals 1d6 damage/caster level (maximum 20d6). This damage is halved with a successful Reflex save. The wounds inflicted by this spell strip the flesh, tear jagged rents, and twist limbs. Those suffering wounds from this spell must also succeed on Fortitude saving throw or take 2d4 Charisma damage, taking on a horrific appearance.

5 thoughts on “Spells of Sunken Empires”