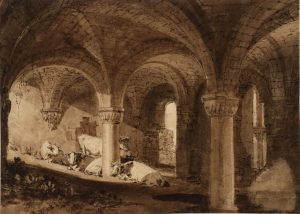 The Deep Delvers began their existence as a small group of magic-users, somewhat drunk, who’d wondered what they would actually do with their magic. One of them, in a burst of inspiration, noted that a lot of animals somehow detected things by using sound, so what if they did the same thing? Except instead of finding their way around, they figured out how to “hear” different materials through sound magic and started looking for treasure and valuables? The idea turned out to be oddly successful as a few of the members went up to the mountains to look for gold (and other valuable minerals) while others of the group decided to try to map dungeons from afar by using a sort of magical echolocation. It quickly proved to be impractical to totally map a dungeon from the outside, but they could usually manage at least the first few rooms. The end result was a surprisingly detailed mapping system for the early parts of ruins and the like. Money started to trade hands, and though the Deep Delvers have never been very numerous, they’ve done quite decent business by alerting adventurers to early traps that could be found by discovering the shapes of areas (pits, hidden boulders, and so on). Like many magic-users, the Deep Delvers jealously guard the details of their spells, and few outside their group know precisely how they manage to do what they do. They usually get along fairly well with dwarves.

A group of thieves and rogues, the Silent Key is an underground group of capable robbers who have centered their efforts around avoiding being noticed, rather than outfighting armed guards and the like. That usually doesn’t end well for thieves; instead, they use carefully crafted magic to manipulate sound, allowing them to operate in utter silence no matter how loud their actions would normally be. The members are also highly adept at a secretive hand code, communicating their intent with minimal motion as a way of further avoiding notice by those who’d dearly love to know how their valuables keep getting taken when they never heard a thing.

The Accusers are a reclusive brotherhood, operating the unusual business model of providing certain services to the dead. In exchange for a set amount of valuables, the Accusers use necromancy to bring the souls of the dead into their bodies for a few minutes. During that time, the Accusers also use sonic magic to amplify their voices to the point that their shouts will cross the entire city, and the dead are permitted to shout accusations at their murderers, remind debtors that money is still owed—or just tell their family not to worry, thanks, everything’s wonderful where they are. It varies, really, on what the spirits of the dead actually want (though the Accusers do tend to only permit good/neutral souls to come into their bodies), further reinforced by protective magical barriers to ensure that nothing gets out which shouldn’t. They’re more about communicating with the living than controlling the dead, but they’re still eyed uneasily, especially by those who’d rather not have their misdeeds shouted for the world to know.