Skip to content
Home / Delve into the Depths in the Kobold Blog / Secret Lairs: The End of Roads 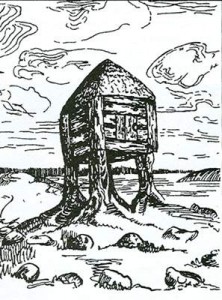 At the end of the path, diverging from the road, there sits a homey looking shack. It smells of hearty stew and delicious bread. A pleasant sort of kindness fills the air, and the scent of the food is mouthwatering, making it hard to resist the inevitable pangs of hunger.

Two old hounds lie wearily beside the door, doing no more than politely lifting their heads as you approach. Looking back, the outside world wavers unsteadily. The path is gone, replaced by foreboding trees—the road nowhere in sight.

Inside, you find a plain square room, each wall measuring nearly 25-ft. The aroma smells less pleasant as the door opens and you enter. Bent over a cauldron at the far end of the room is an old crone stirring with a heavy wooden spoon…

Turning to face you, you see she has no eyes. The dogs begin to snarl, their bodies rippling, growing. The old crone smiles, “Just in time for lunch.” Pulling her spoon from the cauldron, thick stew drips from the small skull at its end. With a toss of her hand, you suddenly feel heavy with her cackling curse.

Mother Crone began years ago as a witch, working small charms of memory and magic. As age assaulted her, she felt death coming on and made a pact to stave it off. The pact twisted her, trapping her eternally within the End of Roads. She now waits maliciously to change those who find her into her “little boys and girls.”

Her two “little boys”  defend her viciously, though they too were once travelers. Now all that remains in their world is Mother and serving her will. They target the character closest to her at all times, protecting their mother.

Mother’s Rage
After Mother Crone first becomes bloodied and until the end of the encounter, her allies gain a +2 bonus on melee attacks and melee damage rolls against the character who bloodied her

The home of Mother Crone is suspended outside of the world, connected tangentially with our own through a maze of charms. Those who find their way in, find leaving again difficult, for the charms confuse their eyes and drain their strength.

Perception (moderate difficulty)—You discern the right direction and stay to the path despite the magics in the way. If you succeed, you may immediately make a Nature or History check:

Arcana (hard difficulty; success counts as two successes, failure counts as two failures)—Feeling out the charms, you follow their threads: they can bring you much closer to escaping or lead you deeper.

Endurance (moderate difficulty)—Two Endurance checks are required as you make your way from the End of Roads. If both are failed, the surrounding charms dull you into sleep.

After Two Failures—Many of Mother’s Little Boys have been set free over the years, wandering lost in the spells surrounding the End of Roads and the characters stumble upon two of them. If the last check failed was a perception check, you are surprised. If both failures were Endurance checks, you awake surprised and prone while being attacked.

After Three Failures—You stumble out somewhere along the road, far from where you left it. You are days further away from their destination.