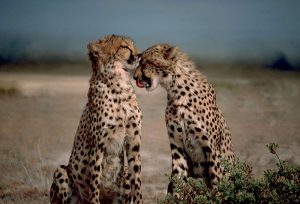 New magic items for Pathfinder Roleplaying Game that you take directly from your foes’ corpses.

As the cheetah studied its prey—an oblivious antelope grazing no more than 50 ft. away—it paid no attention to its own stalker, the young orc warrior Grim-Eye. Only after bringing the frightened animal down did the winded cat realize its predicament, readying itself for another battle.

Defeating the cheetah, Grim-Eye took great care in removing its rear paw as his elders had taught him. He carried his trophy, as well as the dead antelope, back to his tribe, who ate well that night. In return for his successful hunt, the tribal shaman bestowed upon Grim-Eye a measure of the cheetah’s power.

Many savage humanoids believe beasts and other humanoids have inherent power. When they slay a creature, they can take its power for themselves in the form of a fetish—a trophy from the kill. In civilized societies, people frown on individuals who adorn themselves with teeth, tusks, and feathers; they actively persecute those who obviously wear gruesome trophies from humanoid races…

Once extracted, the fetish can be empowered (Wisdom DC 13); this works only once for a particular trophy. In place of a Wisdom check or to sustain the fetish’s power, characters can imbue items (themselves or with assistance from magically proficient allies) using the feats below. If the fetish’s owner does not repower the fetish within 1 week’s time, the fetish no longer functions as a magic item.

If a character defeats a creature (subject to the restrictions above) that possesses its own fetishes, that character may take and benefit from them. (Typically, a tribal shaman or chieftain owns the most trophies.)

You use your magical abilities along with the recipient’s blood to imbue a fetish with power.

Benefit: You perform a ceremony that takes 1 hour/250 gp of fetishes you imbue with power. After you complete the ceremony, you reduce the saving throw DCs and variable numeric values of all your spells by 1 point/250 gp of items empowered. Additionally, this ceremony reduces the maximum hp of the fetish’s possessor by 1 point/250 gp. Both effects last for 1 day.

You use your rage to power a fetish you own.

Stay tuned next week for the conclusion of “Savage Fetishes.”