Skip to content
Home / Delve into the Depths in the Kobold Blog / Monster Monday: The Slender Man 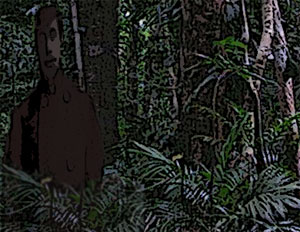 Leaves skitter along the dry path, tumbling over the exposed roots of old-growth trees. The smell of fall provides a crisp counterpoint to the cutting cold that crept into the air as the sunlight fled not too long before. A slight breeze picks up more leaves, stirring them lazily, then dies before it becomes a gust. Out of the corner of your eye, a tree shifts. Did the flow of wind cause it, or was there more to that movement than a weak breeze could explain?

The Slender Man is a living nightmare. It appears as an inhumanly tall, lanky, humanoid with disturbingly long limbs that sway in the breeze. When seen, the Slender Man stands completely still, taking on the silhouette of surrounding trees so that it can ambush its prey. The Slender Man’s flesh is jet black except for its pale, dull featureless head, which is tilted to one side as if it was regarding its subject of interest with morbid curiosity. The contrast of the Slender Man’s light head but dark body appears to be natural camouflage, since it gives the impression from a distance that it is a man in a dark suit. The Slender Man has no visible mouth or facial features, but some have claimed to hear it softly whispering to them before it attacked from the shadows.

The Slender Man Throughout History: Sightings of the Slender Man coincide with important events throughout time, such as assassinations of world leaders and major disasters caused by the actions of intelligent beings. Scholars have found references to creatures that resemble the Slender Man’s description in the historical records and artwork of dozens of civilizations. Although none know if the Slender Man had a hand in these events or was just a curious observer, the one thing scholars agree upon is that such appearances seem intentional and not random.

Stalking Its Prey: Although its motives remain unknown, the Slender Man is rumored to be a saboteur and assassin for an ancient and powerful demon prince, and it works alone. Heroes who have angered a powerful evil entity can be hunted by the Slender Man. It often choose a particular area to wait for its prey. Dilapidated buildings, ancient ruins, and dense forests make prime ambush spots. The Slender Man scouts out these location days or weeks in advance, as if it somehow knows its victim will eventually travel there.

Although rare, there have been documented cases of small cults that form around those whose minds have been touched by the Slender Man. Cult leaders claim to have been rendered unconscious by its whispers, yet are found unharmed; however, their minds never truly recover.

Enemies take a -2 penalty to saving throws while in the aura.

The Slender Man deals 2d6 extra damage against any creature granting combat advantage to it.

If the Slender Man misses with a melee attack while hidden, it remains hidden.

The Slender Man makes two lashing branch attacks. If both attacks hit the same target, the target also falls prone and is dazed (save ends).

Effect: The burst creates a zone that remains in place until the end of the Slender Man’s next turn. The zone blocks line of sight, squares within it are totally obscured, and creatures in the zone are blinded until they exit. The Slender Man is immune to these effects.

Effect: The Slender Man alters its physical form to take on the shape of a tree of 5 to 10 feet in height until it uses change shape again or until it drops to 0 hit points. While in this form, it can squeeze through any opening that is large enough for a creature of Tiny size to squeeze through. Other creatures can make a DC 34 Insight check to discern that the form is a disguise.

Attack: Close burst 1 (one creature granting combat advantage to it); +17 vs. Will

Hit: The target is stunned (save ends).

First Failed Saving Throw: The target is unconscious instead of dazed (save ends).

Kevin Williams has playing D&D for 25 years and Dungeon Mastering a bi-weekly 4e Eberron game for the last 3 years. When not killing his players, Kevin is a cyber security engineer and proud father of a girl gamer. You can follow him on Twitter at @DharmaTel.