Skip to content
Home / Delve into the Depths in the Kobold Blog / Review: Eureka! 501 Adventure Plots to Inspire Game Masters 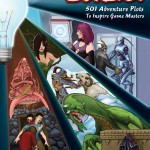 It’s really an excellent time to be a GM; companies are falling all over themselves catering to us. The recent releases of the Dungeon Master’s Guide 2 by Wizards of the Coast and the simultaneously retro and forward-thinking GameMastery Guide by Paizo are both excellent sources of advice and tools for running a game, full of insight even for a jaded old warhorse like me. The lists of noble titles and the vocabulary set in GMG made me smile; Gygax would have loved these books.

But sometimes it’s up to a small, new outfit to try wild and weird new things—wonderful experiments in GM help like Eureka, a collection of 501 half-page plot summaries, each of them enough to kick off a great RPG session. The book is a meaty 314 pages long.

This is the first big project from the blogging crew over at Gnome Stew, and let me tell you, they must have slaved over this thing for a year. Every time I thought “Yes, but that won’t work because…” they were already there, thinking it through. Much more than a simple book of plots, Eureka! stands as one of those essential tools that GMs and game designers will find themselves reaching for again and again. Here’s three reasons why…

Reason #1: The Core Plots Work. The entire book is built around the 36 Dramatic Situations, a set of conflicts first described and outlined by Georges Polti 100 years ago and which should be familiar to every writer, screenwriter, and game designer.

Depending on your perspective, the 36 situations are either classics or a hoary old chestnut in narrative, but regardless of your take on them, they work. And no one has ever used them to spin up 500 RPG plots before, an idea that seems completely brilliant and obvious only in hindsight. So, bravo gnomes!

Reason #2: Genre-Independence: While the plots are written for fantasy, for SF, and for horror, you might think that 2/3 of the book are wasted space if you prefer a single genre for most of your gaming. Guess again! The clever design of the book indicates exactly which plots are most portable to other genres, and even subgenres. The “big three” game genres are covered (though I wish they had weighted it more heavily toward fantasy, rather than giving horror and SF equal time), and they are also tagged.

For instance, a plot might be listed as “Easily adapted to: Grim and Gritty Fantasy, High Fantasy, Pulp, Romance, Sci-fi, Space Opera, Steampunk, Supers, Swashbuckling, Traditional Fantasy
Tags: (WC) difficult choice, innocent, intrigue,
investigative, politics, social, stealth, tactical planning, travel, twist”. Gives you a pretty good idea of what that one is about, no? And rather different from one that is tagged “Deadline” and “Dungeon Crawl”.

So if you need a steampunk plot, that’s already covered, and if you need a horror plot but want to adapt it for fantasy, the book makes it easy to find one. Which takes us to… 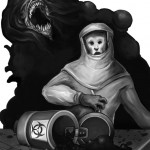 Reason #3: The Index is OMFG Awesome: Too many publishers do a crappy job with indexes these days, but not the gnomes. This is an extremely well-indexed volume, and that alone makes it much more worthwhile. As a reference work, of course it is not the sort book I want to read cover-to-cover. I don’t want to read plot after plot: I just want the right plot when I need it, with a minimum of fuss. And that’s what the tagging and subgenres do, in combination with a linked, completed index. I’ve built indexes, and it’s hard work. Bravo to whoever did the grunt work to make this book much more usable.

Summary
You may say to yourself, “But it’s $35! And it’s just plots!” Frankly, if that’s your reaction, you’re probably better off spending your hard-earned gaming dollars on new $35 adventures from WotC or each $84 adventure path in six volumes from Paizo. This satisfies a different gaming itch — Eureka is super rocket fuel for homebrewers.

I recommend it for anyone who would rather roll their own, and whose house campaign could use a twist, a curveball, or a kick in the narrative pants.