Skip to content
Home / Delve into the Depths in the Kobold Blog / Relic: The Lamp of Departed Vistas 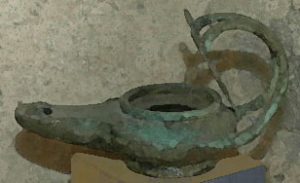 This unassuming, ancient bronze oil lamp looks like any other peasant’s light source. Though most have heard the legend regarding lamps that hold mighty genies, few have heard of the legend of the lamp that holds worlds.

The lamp of departed vistas has existed for thousands of years, and an untold number of locations lie hidden within it. How many worlds remain trapped in its mesh of demiplanes, and what treasures or prisoners have been left behind, is anyone’s guess. Read on to discover more about how one can discover the environments within the lamp!

If the lamp of departed vistas is filled with a handful of ash or rubble, the lamp warms to the touch, and the debris begins to swirl inside it. Not just any debris will do — only the remains of a location that has been destroyed or changed beyond recognition will work. After ten minutes, the lamp finishes absorbing the memory of the place and appears empty.

Any character that peers deep into lamp (either willingly or through trickery) is physically transported inside it, vanishing from this world. However, if a character knows the command word, he can speak it up to 10 minutes before looking inside the lamp and instead project his consciousness into the lamp (as the spell astral projection) without physically leaving this world. Either method of entry is a full-round action.

Upon entering the lamp, the visitor manifests at the same arrival location as the person who last entered the lamp. If the visitor has knowledge of a specific demiplane (or a location on a demiplane), he can choose to enter that specific location by succeeding on a DC 25 Knowledge (planes) check as he enters the lamp.

The world inside the lamp of departed vistas resembles the original location as it appeared shortly before it was destroyed or changed. It is populated with generic people or creatures that would be typical to the location. Particularly prominent individuals are specifically reproduced (though they exist as people remembered them, not as they actually were). The world is not a perfect recreation, and it cannot be used for investigation beyond what the spell vision could reveal.

The world inside the lamp is alluringly realistic, and it can trick visitors into believing they have reclaimed the past. Encountering a blatant discrepancy entitles the visitor to a DC 23 Will saving throw; if he saves, he sees that the world is nothing more than smoky wisps of incense, bending and dancing to produce colors, sounds, and textures. Failure indicates that he finds some way to explain away the discrepancy. If a visitor is familiar with the original location, he is entitled to a DC 25 Knowledge (local) check (or other appropriate skill) to notice discrepancies on his own.

Sometimes, through decay or by chance, the realms within the lamp can bleed into one another, or if the lamp doesn’t “know” how to recreate a specific location, the lamp will overlap one demiplane with another to patch the hole. For example, a trackless desert could be inside a kitchen cupboard. Predicting where these planar anomalies will occur is difficult (DC 30 Knowledge [planes] check). A visitor who stumbles upon such a place might find himself in an entirely new world.

No limit exists for the size of the location that could be recreated inside the lamp. Ash from a forest creates a vast wilderness of many miles; thread from a torn-down tent creates only the tent. If a visitor tries to leave the area (for example, by leaving the tent), he returns to where he was before he entered the lamp.

If a visitor takes items from the lamp, they persist outside of the lamp as if they were created by greater shadow conjuration mimicking a major creation spell, with all applicable durations. At the end of the duration, the item dissolves into heady incense, then reforms inside the lamp the next day.

Those who do not know the power of the lamp might become its prisoner. If a visitor partakes of any food or other pleasures while inside the lamp, he will find that his way out has been impeded. To escape, he must succeed on a DC 20 skill check. He might find that a door has been sealed (requiring Disable Device), or brambles have grown dense (requiring Survival). Every unique indulgence beyond the first increases this DC by 2, to a maximum of 40. If he has successfully discovered the illusory nature of the world, he receives a +15 circumstance bonus to this check. In either case, he can attempt escape only once per day.

Each location inside the lamp of departed vistas must be destroyed in a manner similar to its original destruction. Upon collapsing the final demiplane, the lamp becomes an inert, common oil lamp.

Erik is an aspiring freelance writer who lives with his wife in Redmond, and he enjoys GMing, hiking, skydiving, and going to church. You might recognize his name from the Paizo.com boards, or last years RPGSuperstar contest. Rather than telling the GM what to do, Erik likes to craft seeds that unleash a GM’s own creativity.

4 thoughts on “Relic: The Lamp of Departed Vistas”