Skip to content
Home / Delve into the Depths in the Kobold Blog / Character Theme: Gray Warrior (Part 1 of 2) 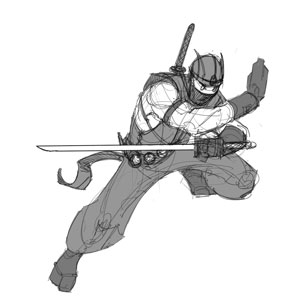 The gray warriors are as much legend as fact in the eyes of the common people. Shadow warriors, assassins, and spies, gray warriors are sought by noble houses in times of war to assassinate enemy generals and sabotage enemy defenses. In times of peace, nobles employ them as spies and assassins to ensure that they always have the upper hand.

You have been raised by a gray warrior clan, and although you might not have given part of your soul to shadow like many in the clan do, you have learned the clan’s secrets of alchemy and shadow magic, which makes you a valued agent of the clan.

A gray warrior has many reasons to take up the life of adventure. Perhaps you are on a mission for your clan, or perhaps you have chosen this path to serve as a stage of your training before you advance to greater mysteries. Maybe your clan was destroyed and now you seek the means to enact vengeance on your clan’s enemies. No matter why you adventure, one thing is certain: your training gives you advantages as you make your way in the world.

As a gray warrior, you are taught the secrets of alchemy, which lets you craft items that are useful in a wide array of tasks. Among these secrets, you learn one that allows you to make shadow eggs, which you can use to make a quick escape from danger.

Benefit: You gain the Alchemist feat as a bonus feat, and you gain the cloud of smoke power.

Cloud of Smoke                   Gray Warrior Utility
With a flick of your wrist, you hurl a shadow egg to the ground, which creates a cloud of smoke and shadow that allows you to make your escape in the confusion.
Encounter • Shadow, Zone
Move Action      Close burst 1
Effect: The burst creates a zone that lasts until the start of your next turn. The zone is heavily obscured and blocks line of sight, and creatures inside the zone cannot attack creatures outside the zone. You then shift up to your speed.

Working with the masters of your clan, you have refined your mastery of stealth and alchemy, which makes you more proficient at sabotage, spying, and assassination.

Swift and silent as shadows, the gray warriors bring death and confusion to their enemies. You have learned that speed is of the essence when you seek to bypass your enemies or when you need to strike before they are prepared. Through your skills at making use of shadows, you can slip away from your foes before they can take revenge.

Benefit: You gain a +2 bonus to initiative and can move up to 4 squares without penalty when you make a Stealth check.

School teacher by day, gamer by night, John has been playing and running Dungeons & Dragons and other RPGs since the early 80s, with occasional forays into war games and card games. His focus game at the moment is D&D 4th Edition, which he is playing via the DDI Virtual Table after having moved away from his regular groups.