Skip to content
Home / Delve into the Depths in the Kobold Blog / Real Steel: Manrikigusari 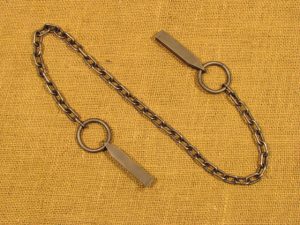 The manrikigusari, or 10,000 powers chain, also called the ryofundogusari, or double weighted chain, is yet another obscure Japanese weapon. The story about its origins that I like best is that the samurai who guarded Edo castle were forbidden from spilling blood, and so they set aside their usual weapons in favor of this unusual but effective weapon. The same story tells us that this is a modification of the kusarigama, or sickle and chain, with the sickle removed to create a weapon with no blade. I’m not certain I buy that because the kusarigama is Okinawan, and the samurai were not fans of the Okinawans.

This is perhaps the most effective flexible weapon I’m aware of, being not so long as to make it impossible to control, but long enough to create considerable reach. There are no rules, but a typical gusari is between 18 and 36 inches, with 20–24 inches being fairly typical. It’s quite versatile and can be used for strikes, chokes, traps, and throws. It’s also very small and concealable. One favored technique is to hold the coiled chain in one hand and throw one weight while holding on to the other.

Although not impossible to control, this weapon is very difficult to learn and use effectively.

Don’t Beat Yourself Up

Flexible weapons have the nasty tendency of biting the operator, and this one is no exception. It’s hard to control when swung, and the weights will cause a very deep bruise every time. If it strikes an area over bone, it will cut, despite its being considered a “bloodless” weapon. In expert hands, however, it can be concealed and then quickly deployed to devastating effect. 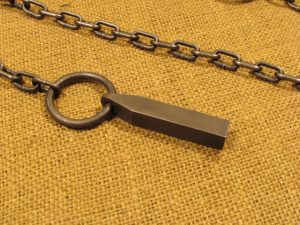 This one is very simple to make, and the materials are inexpensive mild (low carbon) steel. I’ve used materials of various sizes, but I think I’ve settled on 1/2” square bar, 3” long, drilled and ground thinner on one end to receive the ring. The ring is either 3/16” round bar, or a link from larger chain. I cut the ring and bend it open, put on the chain and weight, bend the ring closed, and MIG weld the seam.

A short soak in ferric chloride followed by a cold blue in 50/50 selenium / phosphoric acid, and it’s done. I think the cold blue really gives it the appearance of age.