Skip to content
Home / Delve into the Depths in the Kobold Blog / Midgard Dungeons: Hecate’s Moon Temple (Near Mount Parini) 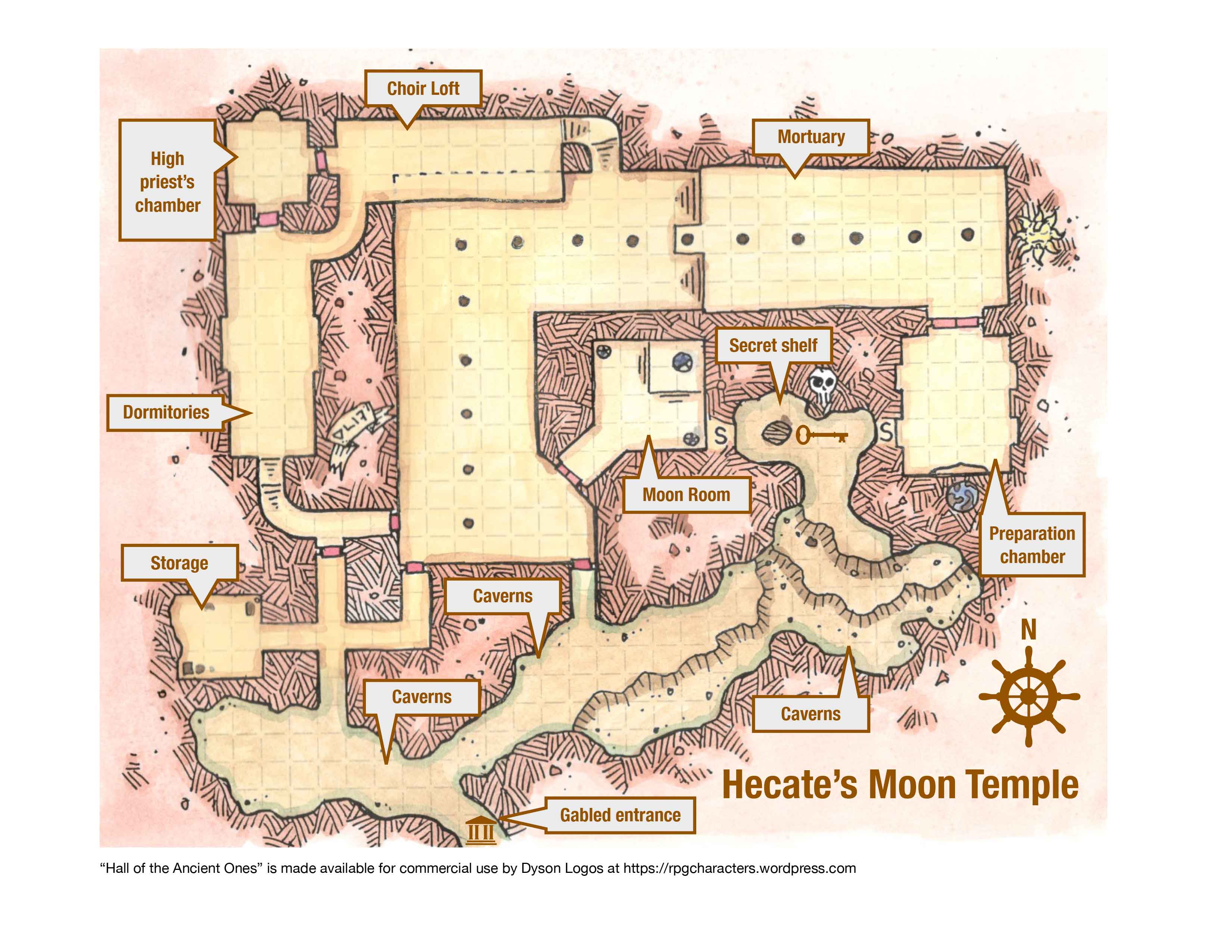 The mountain at the heart of the island rumbles—smoke and lava vent from fissures and craters, geologic might being the most persistent guardian of Hecate’s Moon Temple. Nearby, the doorway to a shadowy byway crackles with arcane energy, detectable and accessible only by those who are initiated in one of Midgard’s most enduring mysteries. But for all that, the Moon Temple that belongs to the Bringer of Magic has fallen.

Spectral guardians and other servants of a rival god, Mavros, recently attacked it, evicting its small contingent of caretakers. Now, its fabled entrance is blocked by elephantine guardians. And like the legendary labyrinths of old, fearsome snorts echo from the darkness, tauric patrols eager to hunt down and slay any who get lost in its uneven, twisting caverns.

Priests of Hecate want the invaders ousted before the treasure-filled Moon Room is breached. It contains a sacred item that must be preserved.

Location: The dungeon is in the hinterlands of Kyprion, adjacent to Falspecca’s ruins in the southern foothills of Mount Parini. Ionic pillars carved from the rock support a sculptured gable, marking the cave entrance to the Moon Temple. Carved in relief upon the decorative entrance are seven phases of the moon. Though ancient and weather worn, the symbols are visible: the full moon at the center is bisected by a downward-thrusting sword.

Lore: Worshipers of Hecate accompanied some of the earliest civilized colonists to Kyprion. These disciples of the Lady of Darkness, Lady of Sighs, and Lady of Tears—as Hecate is known while the heavenly body waxes and wanes—recognized the symbolic importance of their new home. Floating like a beacon in the wine-dark Middle Sea, the island was viewed as analogous to the moon as it traverses a clear night sky.

A secretive Hecate sect constructed the temple in the vicinity of the Pontoretto shadow road and within sight of the volcano, a recognition of their respective powers, eldritch and primordial. By establishing the temple at a respectful distance, they could, with caution and reverence, tap into them.

Over time, the temple served many purposes: site of pilgrimage and active worship, repository of relics, and as the final resting place of Hecate’s most devoted believers. The mortuary, featuring hundreds of caskets set into the floors and walls and each marked by a decorative stone facing, is a wide L-shaped chamber whose floors and walls are buffed to a shining finish.

The complex—originally dormant lava tubes—were widened, expanded and refined with an architectural expertise that rivals any surface temple. Constructing it underground proved farsighted; it was unscathed during Mount Parini’s eruption a half-century ago while nearby Falspecca was buried under ash and lava.

The Moon Room lies at the heart of the temple. Its ceiling chimney reaches up through the layers of rock to the sky. The moon overhead is revealed, reflecting Hecate’s white light upon the dais and altar below. The Moon Room serves as vault for statuary, frescoes, and other items revered by the faithful. The path to the altar is said to be like a meandering walk through a garden, but instead of flowers, there are arrangements of artifacts and mementos whose value is measured in coin, beauty, and sanctity. The great stone doors to the vault are sealed with engineering ingenuity. The skylight is secured by divine magic, an invisible barrier more impenetrable than the rock ceiling from which it was carved. The room should be inviolable—except to any who might uncover its secret. 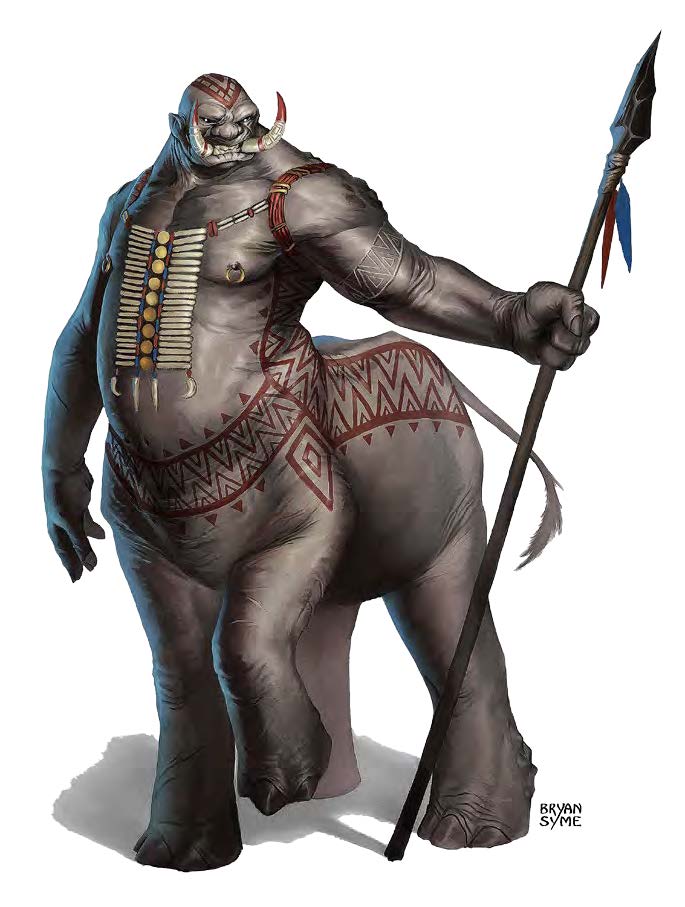 Who: The intruders are under the command of Exagoranzo, a chained angel (see Tome of Beasts). He believed service to Mavros, the god of war, would free him of his torments. A dawning realization that Mavros deceived him now governs his actions. His devotion to the enterprise wanes as each day brings the approach of the new moon.

Treasure: The temple’s greatest prize is Hecate’s finger, a crescent-shaped dagger with the properties of a vorpal sword. The relic rests upon the altar of the Moon Room.

Beasts and Creatures: A cadre of spectral guardians (see Tome of Beasts) evicted the priests and acolytes and occupy the mortuary. A pair of loxoda (see Tome of Beasts), loyal to Mavros, guard the entrance. A warband of zealot minotaurs roam the caverns. Dyonisia, a black knight commander (see Tome of Beasts), serves as a lieutenant for the chained angel. She is charged with discovering a means of penetrating the moon vault without destroying the contents within. She has at her command two squads, each with five Mavrosian knights. Because one of Hecate’s sacred symbols is a key, Dyonisia believes there is a key hidden away that will open the Moon Temple doors. A search of clerical rooms and the choir loft have proved fruitless. But her assumption is correct. She has yet to discover the secret passage from the morgue preparation chamber that leads to a rock shelf in the adjoining caverns. The shelf’s low ceiling makes it so shallow it is inaccessible by the large minotaurs in the caverns. The shelf can only be explored by folk medium-sized or smaller laying flat as they traverse it. The key is tucked away in a niche in a rock pillar that supports the low ceiling.

(Click on the map above for a larger file with keyed locations.)

Credit: The map “Hall of the Ancient Ones” is made available for commercial use by Dyson Logos at https://rpgcharacters.wordpress.com

Troy E. Taylor writes about dungeon mastering for GnomeStew and his blog The Dungeon Delver. He lives in central Illinois with his wife, a motorcycle-riding librarian, and their three children.