Skip to content
Home / Delve into the Depths in the Kobold Blog / Prepared!: The Haunting at Velston 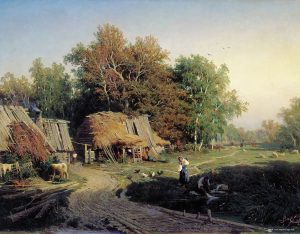 Traveling along a popular trade road, the party discovers a ruined village. Abandoned long ago, Velston now contains only the restless spirits of those who died in the village’s violent end. Prepared! offers the following small scenario for low-level characters.

“Ain’t nobody in these parts willing to knock down what’s left of poor old Velston; cries in the night and shapes in the trees…”

You step carefully through the burned-out homes and crumbled stone walls of the old farming community of Velston. A rabbit peers at you from around a corner before dashing away into the grass. Birds have nested in the remnants of the town hall and call to each other as you pass. Strange that this eyesore has yet to be cleared from its location beside the busy trade road you’ve been traveling.

Velston is the site of a fierce battle that happened fifty years ago between the human inhabitants and a warband of orcs. A successful DC 10 Wisdom (Perception) check reveals blade marks on the walls and door frames. Careful examination of the town hall and a successful DC 14 Wisdom (Perception) check uncovers a skeletal hand bearing a mayoral signet ring (10 gp value.) The story of Velston is not obscure, and its placement along the trade road makes the ruins a subject of conversation in nearby taverns; a successful DC 10 Intelligence (History) check provides the following information:

After a short while, the party hears a single cry of alarm rising from the far side of the ruins. Sounds of a small melee are heard. Observing the site of the combat reveals nothing out of the ordinary, and the sounds of battle fade quickly. Examining the area of the unseen fight reveals the ground has a thin layer of frost on it, and the grass nearby has sustained cold damage. DC 10 Intelligence (Arcana) checks reveal low-level magic remains in the area.

Eventually (likely as the party attempts to leave), the ghost of a former human resident appears before them:

A human-sized figure appears suddenly before you. Dressed in commoner’s garb and wielding a makeshift spear made from farm tools, the apparition looks directly at you for a few moments before pointing toward a small copse of trees nearby. A baby’s cry unsettles the spirit, and he starts off in the direction of the woods before disappearing.

Investigation of the woods reveals an overgrown footpath leading to a well. Entering the area of the well provokes the spirits of three angry orc invaders (shadows) who appear from behind the trees and attack the party. After combat, the baby’s cry is heard rising from the well. The well is 20 ft. deep and 2 ft. wide. Any Medium-sized creature must succeed at a DC 12 Strength (Athletics) or Dexterity (Acrobatics) check to climb to the bottom of the well. Examining the basin at the bottom reveals the skeletal remains of an infant wrapped in a badly decomposed swaddle. Bringing the remains to the surface immediately conjures the ghost again, who holds out his arms. Placing the remains in the ghost’s arms results in the following:

Rather than falling to the ground, the remains disappear as you pass them to the waiting spirit. A broad smile spreads across the man’s face as he disappears into the trees; the baby now animate in his arms.

A glint of metal flashes on the ground where the ghost has passed. A silver brooch depicting an elk’s head (40 gp value) is found in the grass.

6 thoughts on “Prepared!: The Haunting at Velston”