Skip to content
Home / Delve into the Depths in the Kobold Blog / Book Review: Reign of Stars by Tim Pratt 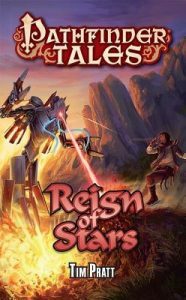 Alaeron is a killer—or at least he was. He’s not your normal stone-cold killer type, but more the “I caused the death of a very powerful captain of the Technic League in the mysterious and treacherous land of Numeria” kind of killer. But that was a long time ago and in a land far, far away. Sure, he lives his life in fear. So what if the league sends assassins after him every so often? Who cares if they want back the gizmos, gadgets, and magic items he spirited away when he fled the country? These days, Alaeron is living a semi-secluded life as an alchemist. All was sort of normal until a semi-incorporeal messenger was sent from his former master whom he thought dead. She asks Alaeron to return to Numeria to do some work for her and possibly clear his name in the process. The chance of not being hounded by assassins and his over-developed sense of curiosity leads Alaeron to accept the invitation. Accompanied by his only friend, the street savvy thief Skiver, he heads off to a land full of wonder that has fallen from the stars: a land ruled harshly by evil arcanists and a mad barbarian king know as the sovereign. Will Alaeron find the peace he is looking for or will his curiosity kill him and his only friend? This novel is tied to the Pathfinder Iron Gods Adventure Path.

I’m not a big fan of alien, outer space technology in my fantasy settings, which is one of the reasons I avoided the Iron Gods adventure path like the plague. I’ve seen it done before, and while it was cool for me as a kid in the 1980s, in 2014 it just seemed stupid. Reign of Stars might have changed the way I view this genre mixing. Reign of Stars, while not turning me into a convert, is a nice mixture of fantasy and technology combined with a decent story.

As far as the Pathfinder novels that I have read go, this one was really good, but not great. It is written well, and the alien technology was handled , too, but with my past hang-ups with this genre combined with a lot of things happening in the first part of the book, this novel seemed a bit unbalanced. This book could have been two books—not because of excessive length but more because there was a point where the story could have ended and ended well. Instead, it kept going. I was fine with what happened after it could have ended, but I would have enjoyed seeing what Pratt would have done with more wiggle room at the end of the story.

Alaeron is mostly a mad scientist without sociopathic tendencies. He is completely caught up in whatever work he is doing, whenever he is doing it. He lacks the innocence that you would expect from someone like him—he takes drugs and has a very flexible moral compass. If he were a character in a tabletop game, I’d say he was neutral bordering on neutral evil. This made him much more interesting. He can logically see why horrible things might have to happen to people to complete an experiment. He shows minor emotional development during the story, but is still socially awkward and not the kind of person I would want to hang out with on a regular basis. This social awkwardness gives him an air of candor bordering on brutal honesty. He is smart enough to know he should not be the face man, but isn’t clever enough to stay out of those situations as often as he would like. I’m glad there were deviations from the normal cloistered magic-using type because they made him seen a little more real and much more likable.

One other little quirk that I thought was a good touch was his ability to throw the alchemical concoctions that he made. I’ve seen way too many “I just make them, but I can’t throw them” types at the table and in books, but Alaeron can do both. I could almost imagine him “bowling” for explosions since it sounds like he is an underhanded thrower. One other aspect of Alaeron that Pratt included that, from my experience, most authors/gamers leave out of their highly intelligent magical types was his ability to make stupid decisions because he was following the little head instead of the big one. Smart wizards normally mean asexual characters that don’t “bother” with sex—Alaeron not only had sex in this book, but it sounded like he wasn’t too bad with his wand.

Skiver was a good counterbalance to Alaeron. He was your typical well-connected rogue, but he has had enough success that common thievery was way below him. Yes, he loved to run scams and make money, but I never saw him as a pickpocket or even a second-story man, even when he was performing second-story actions in the book. The phrase “I’m getting too old for this” seems very appropriate for him. I enjoyed hearing why he was friends with Alaeron. Their friendship made sense, and even if they were very like Mutt and Jeff, it worked and felt genuine.

As you might have guessed from my notes above, the book felt rushed at the end. I understand why Pratt chose the path that he did, but, again, this book easily could have been two interesting novels. Pratt did show his skills as an author by breaking something that could have been the bulk of the second novel up into small vignettes. While I craved more of this type of action, the peeks into this activity were handled well and they gave me a sense of the greater plan and made the brevity of the explanations acceptable. Over all, Reign of Stars shows how Paizo has been able to get some of the best writing talent around for their Pathfinder Tales. If you have played this Adventure Path, I’m sure you will enjoy the official version of the story. If you are not familiar with this part of the Pathfinder World, this book might be just what it takes to get you to play the Iron Gods Adventure Path.