Skip to content
Home / Delve into the Depths in the Kobold Blog / Places to Go, People to See: The City of Floating Whispers 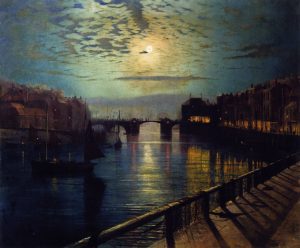 It floated across his face—tendrils of mist against his unshaven cheek. Then he heard the voice, tender and kindly, say, “I will make you lord of this place if you just let me into your mind…”

Imagine a city where the dead linger—they might not clamber up out of graves but some say it’s much worse—the dead in this city whisper to you, offering you anything if you grant them renewed life. Welcome, my friends, to the City of Floating Whispers.

There are too many stories about the city’s origins to trust any of them—one story tells you that an epochal war ripped the city apart and the virulent magic used by wizards on both sides led to thousands of men and women being ripped from their bodies, floating and free. Others speak of a demonic stranger, who offered eternal life to those who could beat him in a game of dice. Those thousands who queued to test their skill and luck against the stranger and lost also achieved immortality—just not in the way they hoped.

Most people who enter the City of Floating Whispers are left frightened and unsettled by the haunting voices, slipping past them as they walk along wide, statue-filled streets. They are bemused by the lack of concern shown by long-term inhabitants of the city as offers are muttered by ethereal presences in every marketplace, brothel, and palace chamber.

Things are different, of course, where your heroes are concerned. Should anyone of real power ever enter the city, the whispers swarm, desperate to attach themselves to a man or woman of destiny. Heroes are besieged by thousands of invisible supplicants—all of them making extraordinary offers in exchange for whatever they want. If the heroes refuse these importunities, the swarm gradually dissipates—but they will never entirely leave the adventurers alone while they are within the city. Expect whispered promises of power, gold, and experience to emerge from the oddest of places, such as from the bottom of a tankard, as a hero drains down the beer; perhaps from the tip of an own arrow as an adventurer draws a bead on a local thug…

4 thoughts on “Places to Go, People to See: The City of Floating Whispers”