Skip to content
Home / Delve into the Depths in the Kobold Blog / One Too Many (Voices in My Head): There’s No J in Kevin, but there’s a K in Paybacks 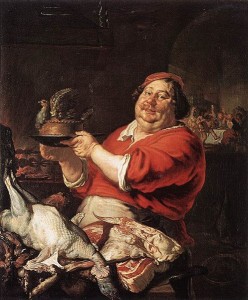 Welcome to Greg “Not a Wus” Vaughan’s One Too Many (Voices in My Head). His last, best chance to exercise those pesky demons. In his column, you’ll find… I really have no idea, but he gave me $20, so… all yours Greg!

As an RPG writer, I am sometimes beholden to that merciless taskmaster, that sadistic overlord, that destroyer of hopes, dreams, and aspirations… no, not my editor… a product review. Actually, I jest. I love getting product reviews of things I’ve written, and everybody I know who writes RPGs does too. Good or bad, all are useful and informative.

In fact, there are never enough reviews out there, so all you readers get off your duffs; you think plunking down your hard-earned cash for a product comes with no strings attached? Heck no. You buy something, you’ve got responsibilities… a duty to the buying public—you owe us reviews! Okay, that may be a bit extreme, but we do appreciate reviews whether they be through KQ, Paizo.com, DriveThruRPG, EN World, wherever. We love ‘em…

All that said, I received my first 1-star review this weekend. Okay, the first one I’m aware of, anyway. I suppose there could be some anti-Greg Vaughan website out there where the legions of disgruntled gamers gather to bash me and burn me in virtual effigy. But if so, I wish they’d contact me because I own the domain names GregVaughanHate.com, WorthlessWriter.com, GregAVaughanMustDie.com, and assorted variations using dirty words. I’d totally cut interested parties a good deal on buying them from me.

But enough ego stroking… I received this bad review at Paizo.com for a Pathfinder Society scenario I co-wrote as part of a trilogy in the Year of the Shadow Lodge adventure cycle. If you’re unfamiliar with what I’m talking about, feel free to pop on over to Paizo’s Pathfinder Society and check it out. I’ll wait to finish this column until you get back… honest.

The trilogy is called The Heresy of Man and is this nice little plot arc set in the atheist nation of Rahadoum and deals with some of the country’s unique political, cultural, and historical landscape… blah, blah, blah. If you know me and have experienced any of my adventures (or have perhaps played in any of my games), you know the adventures I write or run are about one thing and one thing only… how many PCs I can kill or send home crying to their mommas. My poor, abused regular players have lost all emotional sensation of loss, grief, or disappointment. They just keep coming back for more like that mangy dog you always see in the alley behind the restaurant—sure it knows somebody is going to throw a rock at it, but hey, this time there might be fettuccine! I call it lobotogaming. It’s great fun… well, for me anyway; who knows for those zombies.

Back to the subject, though. The scenario is the second one of the trilogy, called Where Dark Things Sleep. Oh, and I lied: it wasn’t just a 1-star review but would have been lower if the rating system would’ve allowed it. How do I know this for sure? Well, I got a little hint from the review’s title:  “If there was something below one star, I’d use that.”

“I really dislike scenarios where the primary objective is to kill as many characters as possible. I actively dislike both this and part one and will be avoiding anything by this author.”

Short and sweet—I like it. In my defense, while she has clearly hit the nail on the head as to my primary objective, my secondary objective was… well, no, that was to kill characters, too. My tertiary objective involved a large sum of money and a talking vole named Sam, but that’s just complicating matters, so we’ll not get into that.

I co-wrote this scenario (and the other two in the trilogy) with a guy named Kevin Wright; I know the cover says Kevin J. Wright, but that’s not his name. It’s Kevin L. Wright if you really want to know. I have no idea where the “J” came from. All I can think of is maybe I accidentally called him that one time while thinking of Star Wars novelist Kevin J. Anderson. Regardless, “J” is obviously very popular as a middle initial (certainly more so than wimpy “L”—what’s that supposed to be, “Lynn” or something?), so you might consider using one yourself. What were we talking about?

Now the real story behind this scenario is that while I was at Gen Con this year absorbing the usual threats and curses from people who have had the misfortune of playing through one of my adventures with a particularly favored character, one small voice reached me through the din. I don’t recall the guy’s name, but he mentioned he really enjoyed my Pathfinder Society scenarios because they allowed the players to really get into the adventure without having to constantly worry about the threat of death hovering over their heads.

Yes, yes, I nodded, knowingly. It’s always best for players to not use their favorite characters when they go through my adventures… wait, what?!?!

Sure enough, the guy had the temerity to tell me that my PFS scenarios were (gasp!) easy. I could feel the gorge rising in my throat at his words. Now, if you’ve never experienced the feel of gorge rising, I highly recommend it. It’s a bit uncomfortable at first but lends a real flair for the dramatic. Unfortunately, gorge that riseth tends to also falleth, as this unfortunate fellow discovered when he experienced the sensation of gorge falling—on his feet, specifically. He definitely picked a bad day to wear sandals, but I digress.

After wiping the remaining gorge from my face with the newly purchased Gamer Chick Magnet T-shirt he was holding in his hand (he told me I could keep it, nice guy that fellow), I mumbled something about the chicken teriyaki at the food court and excused myself to ponder the gravity of what I had just heard. I… me… yeah, that guy… had just been told that my scenarios were easy. I’m the guy whose bio for convention appearances says my dream is to have a vintage WWI fighter plane with a stamp on its fuselage for each TPK I cause—a sadistic Snoopy for the gamer crowd. This suggestion of leniency on the part of my scenarios could not be allowed to pass unchallenged.

Some might say the fellow had been adequately chastened &emdashhe was currently in the restroom picking teriyaki reruns out of his Birkenstocks, after all&emdashbut something had to be done. My image as a heartless cretin was in jeopardy. I had to get paybacks against anyone who dared to scoff at my adventures as easy.

I was already slated to write this trilogy with Kevin, so once I was back in town, we had a development meeting, and I laid out my plan. He thoughtfully reminded me that, though he was all for the carnage I proposed, the destruction of PCs technically had to be done within the framework of the Pathfinder RPG rules. (So much for the free cigarette lighter to be secretly distributed to GMs with each copy of the scenario—you know those record sheets are highly flammable.) Some compromises were made, some rules were stretched, broken, bent back into shape, and repaired with bubble gum and paper clips, and then stretched some more: the end result was The Heresy of Man trilogy.

And here we are, back to the review. I guess maybe I could put some sort of Surgeon General’s warning on my games: “Warning, this scenario was designed with the sole purpose of messing up your junk… may be harmful to pregnant women, but the results are still out on that. If you experience priapism for more than 4 hours… whoa! what’s that all about?”

Or maybe each adventure should come with a coupon for either a free carton of Ben and Jerry’s or a box of Kleenex. You get the idea. I would say I’m torn between my urge to commit bloody violent mayhem on all PCs that enter into one of my adventures versus the desire to reach out to gamers who are looking for a more mature, thoughtful game where things like diplomacy and character development are the order of the day, but that would be a lie.

I’m pretty much just out for the whole death thing.

The reviewer closes by stating that she will avoid anything by me in the future, and I kinda’ think she’s probably got a good idea there. It doesn’t seem likely that I’ll be changing my tune in that department, and to be fair, I don’t expect consumers to change theirs just for my benefit. There are enough masochists out there for me to keep writing stuff for a long time. That Kevin guy, though, I hear he read this review and got all weepy and soft. So you might watch for some new titles by him involving things like elves, unicorns, and/or double rainbows. Meanwhile, I’ve got to get back to writing my newest scenario, Wusses Die First.

11 thoughts on “One Too Many (Voices in My Head): There’s No J in Kevin, but there’s a K in Paybacks”