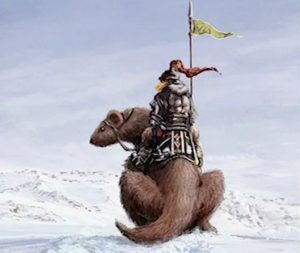 Our kobold mascot Jiro left this note on Wolfgang’s desk this morning:

Wolfgang checked with Christina Stiles and Ben McFarland, and they confirmed it: there’s a new Open Design patron project that they say will shake the pillars of heaven, and they’re looking for patrons to help design it.

Midgard Tales will contain 13 new adventures for the Pathfinder Roleplaying Game, with new takes on classic RPG themes. This book will define the Midgard campaign setting the way legendary adventures such as Dragonlance did back in the day.

Patrons will join lead designer Christina Stiles, assisted by Ben McFarland and Wolfgang Baur, to pitch and design 13 adventures for Pathfinder RPG that will remake classic themes. Already they’re hearing from various designers who want in, with tales such as:

Adventures to be remembered, adventures that won’t be “just another dungeon” — Midgard Tales aims to encourage the best of new and existing adventure design talent, to give you adventures from levels 1 to 15 that your players never forget.