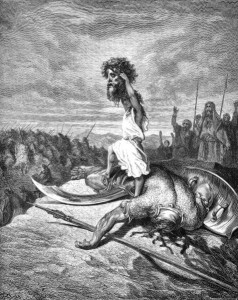 Through magic ritual or some strange forgotten artifact, some creatures are given to monstrous size. They appear, for the most part, as larger versions of a normal creature. Some are more muscular, others may be stooped or hunched with the added weight that comes with their size. They rarely have weapons or armor crafted to their size although an improvised tree and a thick hide often compensate…

Giant is a template you can apply to any creature of size Huge or smaller. These creatures possess larger than normal size, which gives them enhanced physical abilities.

Prerequisite: Any creature of size Huge or smaller

Increased Size
The giant creature’s size becomes Large. If the creature was already size Large or greater, then increase its size by one step instead (from Large to Huge or from Huge to Gargantuan). The creature takes up more space as indicated by its new size.

The giant creature gains one of the following attacks:

STANDARD ACTIONS
[m] Trample • At-Will
The Giant creature can move up to its speed and enter enemies’ spaces. This movement provokes opportunity attacks, and the giant creature must end its move in an unoccupied space. When it enters an enemy’s space, the giant creature makes a trample attack: +1 vs. Reflex. The attack deals low normal damage for the creature’s level, and the target is knocked prone.

MOVE ACTIONS
[c] Sweep • Recharge 5, 6
Close blast 3; creatures in blast; level −2 vs. Reflex; the attack deals medium limited damage for the creature’s level, and the target is pushed 3 squares and knocked prone. This attack gains a +2 bonus to attack and damage for each creature in the blast.

MINOR ACTIONS
[m] Swat • Recharge 5, 6
Level +3 vs. AC; the attack deals low limited damage for the creature’s level, and the target is pushed 3 squares and knocked prone. This attack can be used when making an opportunity attack.

A giant creature with swat takes advantage of its threatening reach to attack foes that approach, pushing them into hazards or adjacent to its allies if possible.

A giant creature with sweep often targets the largest group in order to increase its attack and damage, even if it means striking its own allies.

A giant creature with trample is best suited to wide areas where it can maneuver. It takes advantage of its capacity to bowl over groups of foes and continue moving away, using its threatening reach to strike back at any who come near. If any enemies are still prone on the giant creature’s following turn, they most likely draw its trample attack again, with the creature crossing their space multiple times if possible.