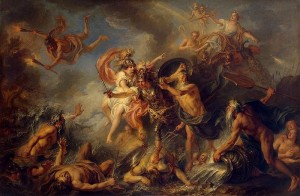 Through divine blessing or the immortal powers from beyond the astral sea, there come creatures of remarkable resilience. These undying creatures may appear only once every century, but they usually rise to a position of power or dominance over their own kind and even over other creatures. They are virtually indistinguishable from normal, bearing no obvious physical differences. Only when an attempt is made to wound them do their remarkable powers become apparent…

“Achillean” is a template you can apply to any creature. These creatures are resistant to almost all types of damage, making them extremely difficult to defeat.


TRAITS
Achillean Fear
While bloodied, an achillean creature suffers a −5 penalty to Will defense against Intimidate checks.

Immortal
The achillean creature’s origin becomes immortal instead of its normal type.

STANDARD ACTIONS
Achillean Defense • Recharge 4, 5, 6
Effect—The achillean creature gains resist 5 all damage until the end of its next turn.
Sustain Minor—The effect persists. If the achillean creature is hit (even if it takes no damage) by an attack it is vulnerable to, it cannot sustain or re-use this power until the power recharges.

An achillean creature shows no fear of damage in battle, but takes no foolish risks that expose it unnecessarily to attacks (such as being flanked or risking opportunity attacks). It uses its counterattack to maximum advantage, by ruthlessly targeting any creature that has shown any ability attack its achillean weakness.

When using this template, a GM might want to give the players a chance to uncover hints of which damage type can hurt the creature. An Insight check at DC 20 + 1/2 the creature’s level might allow a player to discern a clue, such as the creature avoids any source of fire, the creature’s lair is unusually warm, the creature flinches away from loud noises, and so on.

If part of a planned adventure, some hints can be discovered in previous encounters. PCs may learn the creature never ventures out of its lair during a storm or its servants destroy any acid they find.

A generous DM might include a hazard that can expose the weakness in or near the creature’s lair or the encounter site. If this option is used, smart players will certainly find ways to exploit this hazard.