Skip to content
Home / Delve into the Depths in the Kobold Blog / Monster Monday: Terlynne Avrronix—Chaos Bringer, the Piebald Jester, the Abomination 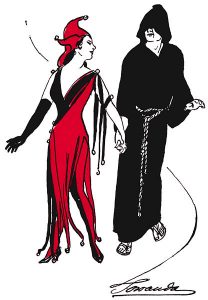 An accursed figure rarely mentioned within the borders of the Sultanate and virtually unknown outside of it, Terlynne Avrronix (CN Large pandemonium dragon) wanders the nations bordering the Empire and brings the somewhat questionable freedom of pure chaos to those who are (she believes) trodden down by structure, order, and law. In her natural form, Terlynne is a piebald dragon; she has albino scales with patches of gold and red scattered haphazardly across her thin and lanky frame. Though weaker than other true dragons her age, her innate connection to the forces of chaos and probability invoke unease and outright fear in her draconic peers.

A forbidden union between a gold and red dragon produced something never before seen on Midgard: a unique true dragon combining elements from both parents. When it came to light, this birth resulted in the arrest of Terlynne’s parents, but the wyrmling was spared in case the new dragon could prove useful to the Empire. This decision was not a popular one, and the child grew up in a world that either wanted her for study or wanted her dead. When she was but a youngling, Terlynne watched as her parents were executed for breaking draconic law and producing such an abomination. This act proved to be the incident that would determine how Terlynne chose to live her life. For the next few decades, Terlynne bided her time, not revealing the true scope of her powers until she was ready to escape. When she did, her first act of defiance left three dragons dead along with many lesser humanoids.

As a self-proclaimed avatar of chaos, Terlynne delights in bringing down structure, revels in unbridled mayhem, and relishes any opportunity to tweak the nose of law. After gaining her freedom, Terlynne fled the Sultanate for the neighboring countries and assumed the form of a human female jester. In her motley costume of red, gold, and black, she wanders from city to city, unleashing her draconic abilities to sow havoc and chaos wherever she goes. She infects a population with her probability presence so that what could go wrong does, and what should be fine never is. Though injuries and deaths do result, Terlynne savors the chaos like it’s the finest vintage wine. Many dragons have been sent after her, but Terlynne shrugs off these attacks through guile and sheer moxie. It also helps that her chaotic powers affect other true dragons, and they are downright afraid of her. Terlynne uses her occasional jaunts into the Sultanate to remind the powers-that-be of her continued survival.

Probability Presence (Ex) As frightful presence except everyone within the area of effect must roll twice for any die roll and take the lower result. True dragons do not receive a save against this ability.

Breath of Wonder Terlynne’s breath weapon functions like a normal dragon’s except instead of fire or lightning it mimics the effects of a rod of wonder (Pathfinder Roleplaying Game Core Rulebook, page 489). Any result that affects the “wielder” instead affects all creatures in the area of effect of the breath.

Control Chance (Ex) So strong is her connection to the forces of chaos that Terlynne has a 50 percent chance to control the results of any magic item with a randomized result (rod of wonder, knucklebone of fate, and so on). In fact, Terlynne’s hoard (which she carries at all times) is made up exclusively of these sorts of items.

Scale of Many Things (Su) Once per month, Terlynne can shed a single scale. The scale functions like a single draw from a deck of many things for the next person who touches it. She thinks it is funny to leave these scales for others to find.

To jump in on the Midgard fun, you can take a look at the Midgard Campaign Setting, which is available for pre-order in softcover and hardcover.