Skip to content
Home / Delve into the Depths in the Kobold Blog / Monster Mayhem: Terror Bird 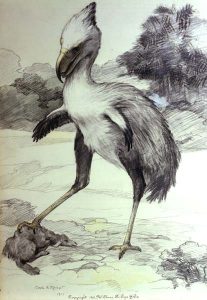 Fast and furious, terror birds run down prey with single-minded intensity, shredding and devouring warm flesh with seeming enthusiasm. These large, flightless predatory birds are often apex predators in primeval forests and grasslands. With formidable beaks and talons, both massive and razor sharp, these birds easily disembowel creatures with a single swipe.

Nature DC 15: Hammerbeaks are a smaller species of terror bird, although no less fearsome. They use their massive skulls and oversized beaks as organic battering rams, smashing prey to the ground where it can be quickly dispatched. Although only Medium-sized, hammerbeaks are sturdy creatures, and if properly trained, can carry Small-sized riders.

Nature DC 15: Razorbeaks are among the largest species of terror birds and can easily reach heights of 10 ft. They are incredibly fast and agile and generally favor hit-and-run tactics. Razorbeaks attack with their oversized, hawk-like beaks but can also lash out with a devastating kick.

+7 vs. AC; 2d6 + 4 damage, and a Medium or smaller target is knocked prone and dazed until the end of the axebeak’s next turn

Swift Defense +1 (while mounted by a friendly rider of 3rd level or higher; at will) ◊ Mount
When the hammerbeak moves 2 squares or more, it grants its rider a +1 bonus to AC and Reflex defense until the start of its next turn

A hammerbeak begins combat by charging the nearest enemy with skull slam. It then focuses its fearsome bite attack on the downed and dazed foe. A hammerbeak is a belligerent beast and does not flee combat even when severely wounded.

[m] Mobile Melee Attack (standard; at-will)
The razorbeak moves its speed and makes a bite attack during the move; the razorbeak does not provoke opportunity attacks while moving away from the target of this attack

[m] Pinning Talon (standard; recharge on 4, 5, 6)
Reach 2; +12 vs. AC; 1d6 + 5 damage, and a Medium or smaller target is knocked prone and immobilized as long as the razorbeak remains adjacent to it (save ends); while immobilized, the target cannot stand up from prone

Swift Defense +2 (while mounted by a friendly rider of 7th level or higher; at will) ◊ Mount
When the razorbeak moves 2 squares or more, it grants its rider a +2 bonus to AC and Reflex defense until the start of its next turn

A razorbeak attacks with its massive, hooked beak, slicing and tearing the flesh of its prey. It prefers to use hit-and-run tactics against targets of Medium size or larger, making good use of mobile melee attack. Once it has weakened an opponent, a razorbeak closes in for the kill. It uses pinning talon to knock an injured target to the ground where it can be easily torn to pieces and devoured.

Terror birds often hunt in small packs, using cooperative tactics much like wolves or lions. Many types of humanoids, both civilized and savage, have mastered the training of these dangerous and intelligent beasts, using them as attack beasts and even mounts.

Terror comes in so many forms… even on flightless wings. Mayhem has black, beady eyes! What would Alfred Hitchcock do? Tell us below.