Skip to content
Home / Delve into the Depths in the Kobold Blog / Monday Monster: Ychen Bannog, Great Beasts of Burden

The hill moved, which of course is ridiculous. Then I heard deep breathing and the crash of the willow coppice as the creatures—for there were two—came into view. The ychen bannog of legend: longhaired oxen the size of churches, flanks steaming in the morning mist from a night’s toil while crows danced about their horns. Great chains hung from them and a smell of earth and musk and toil sang in the air about them. 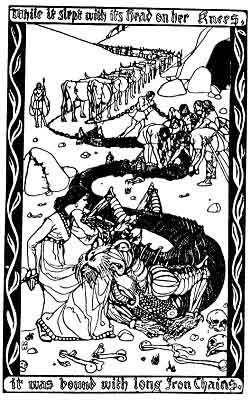 The Strongest Beasts in the World
Capable of pulling 670 tons (or carrying 134 tons on their backs), ychen bannog are regarded as the strongest beasts of burden in the known world. Legends are built on their sturdy backs. When King Nurlac D’Gere slew the Tarrasque, he used ychen bannog to bring its carcass back to his people. When the druid Cyr Thamris built the henge at Tribain, he used ychen bannog. When the Castle on the Cliff fell, ychen bannog pulled it down. Ychen bannog are used on the banks of the great Sorn River to pull massive merchant vessels and warships into the ocean’s currents, and they often pull great barges, groaning with trade goods or stone or timber along the broader canals of the world.
[More…]

The placid nature of the ychen bannog makes them easy to train. A Handle Animal check is required to train the ychen bannog for a specific purpose in the same way as a normal animal. However, their nature also makes them difficult to motivate into combat. Mated pairs remain together for life, and on separation or death, the beasts pine away and die.

Special Abilities
Destroying Bellow (Ex) The ychen bannog can deliver a terrible bellow as a full-round action, 9/day. The attack affects all structures within a 60 ft. cone, each of which faces a break attempt (Str check versus appropriate DC): accounting for Str and size, an ychen bannog’s +27 modifier ensures almost nothing is left standing. (For the purposes of dealing damage to material, assume this ability bypasses hardness.) Furthermore, all creatures in the cone must make a DC 20 Fortitude save or be deafened.
Ever-Sharp Horns (Ex) The ychen bannog’s gore deals a x3 critical.

Ychen Warships
The sails came across the horizon, the edges blurring in the summer heat. This was no freebooter’s warship, plying the ocean, however; this was a land-faring ship with soil for its ocean. As the thing lurched closer, we could see that a massive beast held the deck aloft, and it had coarse fur, great horns, and huge sweating flanks. Atop this lofty perch were giants: at least a score of great men tending huge catapults, trebuchet, and other weapons of war.

Hill giants have a particular affinity with the ychen bannog, which are often found in hilly locales. In times of war, the giants often build complex siege platforms on these beasts’ backs, making effective transport for small armies of giants. Ychen bannog jousting is also popular in some of the wilder and more remote hill giant steadings.

The Ychen Townships
“There is no finer sight, lad, than to see one of the Owein travelling townships come round the valley. Of course, back in the old days, there would be a score or more of these beasts in a single group, but times being what they are, the gypsies have scattered, and now, the Ychen townships are rare. You’re lucky to come upon even a single thorp-peddler these days.”

Ychen townships are a gypsy tradition of the Owein folk who used to build their houses upon the backs of the ychen bannog. Gathering for safety, the gypsies roved the great roads and trade trails between townships, sometimes spending their whole lives living upon the back of a single loyal ychen bannog. The townships were extensive and, often, possessed multiple levels with complicated methods of reaching the ground. The ychen bannog would bear the township for life, and as the family expanded, so too did the number of rooms and buildings upon the creature’s back.

The Ychen Township of Ceris Gwenhyvar
A single great and hairy beast holds aloft what at first you mistook for a church but is now obviously some sort of massive manor house. You see balconies, windows, and steep gables atop the creature’s back, and remarkably, a timber tower rises just above the great beast’s head, its horns used as gabions to support the teetering structure.

A huge banner proclaims that this peculiar thing is a travelling warehouse—the Emporium of Ceris Gwenhyvar.

Ceris Gwenhyvar (male gnome wizard 11) lives and works atop his ychen bannog, a beast so old it served his grandfather. From his rambling traveling home, he plies his wares: magic items and particularly rare spells. Ceris has an extensive library housed in the Ychen tower and lives a life of luxury—his home boasting a great iron stove, an extensive pantry, a terrace where he sits and smokes his long pipe, and a staff of servants. Pallus Shortstone (male gnome wizard 3)—Ceris’s apprentice, butler, and drudge—and Terallicon (male human expert 5)—one of the finest cooks in the land—serve Ceris along the way.

To be invited to dine atop Ceris’s Ychen township is a rare and joyful experience, and the privilege of access to his library is the desire of many a well-traveled wizard.

Like this Monday Monster? Want to make a request? Let us know in comments!