Skip to content
Home / Delve into the Depths in the Kobold Blog / Monday Monster: Cynoprosopi 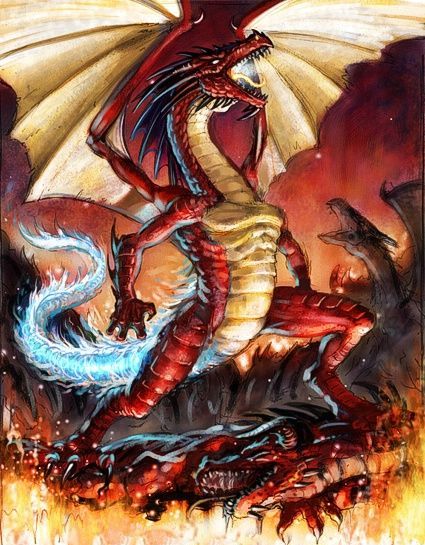 Flying across the arid steppe is a monstrous draconic beast with bat-like wings, a scaled body and legs, and the head of a mangy wolf with a thick goat-like beard. Its scales are a uniform light brown, while its wolf head is dark brown with gleaming red eyes. The dragon-wolf flexes its vicious claws and fire licks from its mouth.


The cynoprosopi or dragon-wolf is a winged dragon with the head of a wolf or hound. Cynoprosopi live in small close-knit packs and dwell in dry steppes or deserts where they hunt gazelles, horses, and buffalo. Despite their bestial appearance and lack of interest in treasure, cynoprosopi are evil and rapacious monsters, and have near human intelligence.

[m] Diving Pounce (standard; recharge 5, 6)
The cynoprosopi flies at least 5 squares and makes two claws attacks against a target. If both claw attacks hit, the target takes an additional 1d8 points of damage and is knocked prone. The cynoprosopi must land in an adjacent square after the attack is resolved or it crashes.

[m] Pack Hunter (immediate reaction; when an adjacent ally hits with an attack; at-will)
The cynoprosopi shifts 1 square and makes a bite attack against the same target that its ally just hit.

Cynoprosopi Tactics
Cynoprosopi prefer to hunt in packs, half of the beasts landing and using their breath weapon, while the rest make diving pounce attacks. The cynoprosopi then engage in melee, at least two ganging up on a single target to make use of their pack hunter ability.

A solitary cynoprosopi attacks first with its breath weapon then spend an action point to use its diving pounce. A cynoprosopi withdraws from combat once reduced to a quarter of its hit points unless its young or territory is threatened.

Cynoprosopi Lore
A character knows the following information with a successful Nature check.

DC 15: Cynoprosopi are highly adaptable pack hunters who lair on scorched buttes and barren hills overlooking warm deserts and savannas. Cynoprosopi lack the frightful presence ability of the chromatic and metallic dragons, but their flaming breath weapon can roast their prey quite effectively. Cynoprosopi are often called dragon-wolves.
DC 20: Some savants believe cynoprosopi link the drakes and true dragons. Certainly the dragon-wolves are regarded with contempt by larger dragons, particularly the copper dragons that often compete with them for territory. Cynoprosopi speak a debased and corrupt form of draconic filled with many clicks and hisses.

Encounter Groups
Cynoprosopi are usually encountered in small packs of 5 or 6. Some cynoprosopi will ally with gnolls or other monstrous humanoids (but never as a mount) or with other flying monsters such as manticores and wyverns.

The cynoprosopi is an African legend. What do you think of it? Tell us in comments.