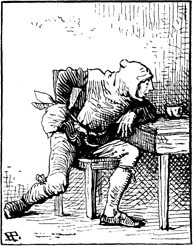 In two earlier parts, Menagerie of Mischief covered ammunition and weapons (part 1), plus explosives (part 2)! Last week, Jerry tackled tools of the trade. This week, take a look at gear.

What people wear often reflects what dwells in their hearts, even among the piece-mealed underbellies and clandestine oligarchies of the world. These bits of gear are often a lot more than they seem at first glance, especially when time for a second glance is never given.

Magician’s Cuff (E, S): First used for parlor tricks and improved upon by artisan leatherworkers of thieves’ guilds the world over, these sturdy leather bracers feature coiled springs that allow for instantly readied and hidden weapons. Somewhat bulky and best worn under loose-sleeved shirts and beneath darkened cloaks, these rather complex armguards have ample bindings that allow for daggers, wands, and small pistols to be holstered and hidden away. They can be triggered only by a precise flick of the wrist, which propels the weapon into an open hand. These cuffs are sturdy enough to support a dagger for plunging into a foe while simultaneously using that open hand to grab them.
Rarity: Uncommon
Cost: Moderate

Dead Man’s Treads (A, S): Referred to as “trackless boots” by the wizards who create them, these boots are intended for the silent study of subjects for arcane research—but on the feet of a rogue they become an instrument of death, espionage, and betrayal. Simple soft leather boots mottled with specks of black dust allow the wearer to become ethereal and hover just above the ground upon uttering a command word. The effect lasts for 5 minutes and can be used again only after the boots are recharged, which the user must do by placing them on the feet of a dead person and burying this corpse for 24 hours.
Rarity: Rare
Cost: Expensive

Multigloves (A, E, S): These pairs of gloves are highly sought after due to their prestigious and omnipotent nature. They are truly an all-in-one solution for most anyone with deft hands. Rumors claim that they are crafted from the hide of a displacer beast, allowing for unearthly sleight of hand and unmatched quickness. The grip area of the gloves features the preserved hooks of squid tentacles, allowing its wearer to scale almost any surface with ease. The fingertips of each glove contain various picks and rakes for picking locks, and the index finger of each glove also houses a small pair of razor-sharp snips. The palm of each glove also houses a circular inlay: When the hands are pressed together and turned slightly, an extremely strong and sharp garrote wire is drawn out between each hand.
Rarity: Uncommon
Cost: Expensive

2 thoughts on “Menagerie of Mischief (Part 4)”