Skip to content
Home / Delve into the Depths in the Kobold Blog / Loaded Dice: The Magic Vampire 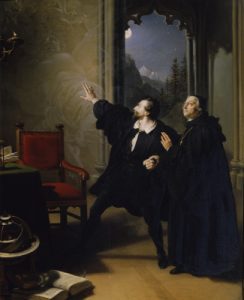 An eternal debate has raged between players who love arcane spellcasters; sorcerer or wizard? The sorcerer has more flexibility, but tends to be a lot narrower in which spells the character can cast, while the wizard knows more spells but has to try and guess which ones will be needed that day. The former gives you a bloodline and special powers, but the latter gives you a school specialty… but why choose one or the other now that you have the arcanist?

The Arcanist in a Nut Shell

The arcanist is one of the new hybrid classes debuted in the Advanced Class Guide, and it’s an uneasy marriage of the sorcerer and the wizard. You gain the additional spells known and spellbook of the wizard, but once you’ve chosen your spells, you cast them using the flexibility of the sorcerer. (You can cast a certain number of spells of a certain level, mixing and matching the ones you memorized for the day.) The idea is to try and bring together inborn power as well as the knowledge and mastery of the arcane in a single class. The most distinctive feature of the arcanist isn’t the way it casts spells though; it’s the arcane reservoir.

What Does the Arcane Reservoir Do?

This class ability, gained at first level, represents a pool of magical potential that the arcanist can call upon to bend (and sometimes break) the laws of magic. The standard use of these points is to increase a spell’s DC or caster level by +1 as part of the casting for a single point, but these points also fuel arcanist exploits (which you gain at every odd-numbered level). You gain a number of points equal to 3 + 1/2 your arcanist level, but it’s possible for you to hold as many as 3 + your arcanist level at once.

If you’re the sort of player who likes to spend points to supercharge your spells as often as possible, then you’re going to want to keep your arcane reservoir pretty full. This is even truer if you take exploits like flame arc or lightning lance, where you’ll be turning those points into raw elemental attacks. Fortunately as long as there’s magic around you, it’s quite possible to siphon it into yourself so you never run out of power.

Assuming, that is, you have a way for your arcanist to consume it.

All the Ways to Devour (Other People’s) Magic

The most basic way for an arcanist to replenish arcane reservoir points is by cannibalizing her own spells. You simply mark off a spell slot as if you’d cast that spell, and you gain a number of points equal to that spell’s level (1 for first level spells, 2 for second level spells, and so on). That means if you like to eat arcane reservoir points like candy (a big risk in combat-heavy games where you’re slinging a lot of spells), you’re going to get tapped out pretty quickly.

Fortunately there are several ways you can fill up your tank without sacrificing your spells in this way.

The easiest way you can keep running hot is to take the consume magic items exploit (Advanced Class Guide, page 10) at level 1. It’s a pretty basic ability: as a move action, you pull the inherent magical energy out of wands, scrolls, potions, or staves and convert it to reservoir points. On scrolls and potions, you gain 1/2 the item’s level in points, and on wands you turn 5 charges into 1 point. If you use it on a staff then the staff loses one charge, and the arcanist gains points equal to the highest-level spell the staff can cast with one charge. If all the staff’s spells take more than one charge then you can’t drain it.

This has a couple of uses. First and foremost it means that there’s never a useless wand, scroll, or potion (provided the latter are second-level or higher) in a dungeon. Even if the items contain spells you’d never use (like mass water breathing in the middle of the desert), or they’re for divine magic you can’t use, they still make for a tasty infusion of power when the chips are down and you need to lay it on thick.

Secondly, this can make for a tasty one-two combination when used with the spell pilfering hand (Ultimate Combat, page 239). The spell lets you make a ranged steal or disarm combat maneuver, yanking an item away from a target and bringing it to your hand. That’s a standard action to cast the spell (and as we know spellcasters don’t have the best CMD), and a move action to suck the magic right out of the wand, scroll, staff, or other item your enemy was just using against the party.

If you want to make this ability a slam-dunk instead of just a smart move, combine it with the swift consume and see magic (Advanced Class Guide, page 12). These abilities let you drink that magic in a little faster, and it practically guarantees you know what you’re looking at before you decide to eat it.

Another way to keep your tank full and your party safe is to take the greater exploit counter drain (Advanced Class Guide, page 13). This exploit (which requires you to be at least level 11 and to have already taken the counterspell exploit) says that whenever you successfully counter a spell that you add points from that spell into your reservoir. A 3rd-level spell will give you back 1 point, and you get another point for every three levels to a maximum of 3 points for countering a 9th-level spell.

Because that comes up so often.

While this ability lets you sip power as compared to the magic item buffet mentioned earlier, you’re getting a two-for-one deal here. You counter a spell, protecting yourself and the party, and you turn that protection into power. There are also multiple ways you can choose to counterspell your enemies.

The first is to use your exploits; specifically counterspell and greater counterspell. This method lets you spend a single arcane point to attempt to counterspell an enemy caster as an immediate action (it’s normally a standard action that you have to have readied). With both exploits, you spend the point, roll a spellcraft check to identify the spell, then spend a spell slot of the same level or greater than the spell being cast (and you get a +5 if you actually have the spell memorized for the day). You then make a targeted dispel check (the DC is 11 + the opponent’s caster level). If you succeed, the spell is successfully countered (unless it’s a spell specifically immune to effects like this).

Complicated, right? But hey, you get the chance to use your immediate action to prevent something like command or mind fog turning your battle sideways in a big damn hurry. That said, you can use a traditional counterspell and still fill up your reservoir.

How Does That Work?

For example, if you have the feat Improved Counterspell, you can counter any spell of the same school as the one your opponent is casting that is 1 level higher. So if, for example, your enemy was casting fireball (a 3rd-level evocation spell) and you had memorized shout (a 4th-level evocation spell) then you could mark off shout to automatically counter the fireball spell, and add 1 point to your reservoir.

If you don’t have a spell of the same school available, though, you can still cast dispel magic to try to counter most spells. Let’s assume a villain was attempting to cast lesser geas on one of your party members, and you had readied an action to counterspell. So you cast dispel magic. As an arcanist, you could spend a single point from your arcane pool as a free action to increase your caster level by 1 (or by 2 if you have the potent magic exploit). If you have the feat Varisian Tattoo (Inner Sea World Guide, page 289) and choose the abjuration bonus, you cast all abjuration spells (including dispel magic) at +1 caster level. If you’re under any other effects that also increase your caster level (such as a dose of the drug mumia, which increases your caster level by +1) then those will also apply.

You can stack up a pretty heavy hammer to bat back your enemy’s spells, assuming you ready an action and go the traditional route.

The last method for an arcanist to refill his or her spell reservoir by stealing from an outside source is through the use of the exploits spell disruption, greater spell disruption, and siphon spell. When all three of these abilities are combined, you can spend 1 point from your arcane pool to attempt to dispel a spell or magic item as if you were using a targeted dispel magic with a range of touch. You roll a d20 and add your caster level and your Charisma modifier; if you succeed, the effect is suppressed for a number of rounds equal to the arcanist’s Charisma modifier. Those suppressed rounds don’t count against the total duration, but a few rounds without freedom of movement can be enough to end a combat.

… Or You Could Just Get a Bigger Gas Tank

There’s no doubt about the arcanist’s sheer flexibility, and the ability to adapt to multiple situations is always useful. That said, if you need more points in your reservoir, the easiest way to accomplish that is to take the Extra Reservoir feat (Advanced Class Guide, page 147). Every time you take the feat, you add 3 points to your starting reservoir, and your maximum number of reservoir points goes up by 3.

For a lot of players, that’s enough. They’ve got different exploits to invest in. Put another way: if you try to master all the different ways to keep your reservoir full to the brim then you won’t have any other abilities.

Generally speaking, it’s a good idea to pick one or two methods to get your points back, and to make sure you’ve got those on hand when you need them. If you can swiftly consume spells from a staff then you can draw power with one hand, and then spend it as a free action to increase your caster level or save DC while you cast a spell with the other hand. If you’re specialized in counterspelling, and you’re on the trail of an evil cult, then you should have plenty of opportunity to flex your magical muscle and put your enemies in their collective places.

Just remember that having all those points does you absolutely no good if you have no idea what you’re going to be spending them on. If you’re fighting trolls, for example, you might wish you’d invested in the acid jet exploit with the lingering upgrade, which you could just keep feeding by draining the wand at your hip. Specialization leads to a bigger punch, but the arcanist’s greatest asset is flexibility. Don’t box your character into a corner by becoming so focused on what you can do that you never ask what you need to do.