Skip to content
Home / Delve into the Depths in the Kobold Blog / Midgard Tales: Hune the Doorlord 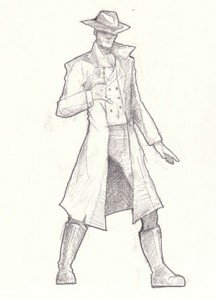 The Midgard Tales Kickstarter continues gathering more patrons, and we want to share our joy at seeing so many more people join in on the fun. So, without further ado, we present to you Hune the Doorlord. Many thanks go to our current patrons, and we hope to see more of you back this project in the near future!

What is unknown to the vast majority of those who know of the Doorlord is his true nature. Known ten thousand years ago as Karakhune the God of Portals, Hune is the last flickering ember of that dying deity. Long ago brought down by the current pantheon of gods, who eradicated the worshipers of those who came before, Hune subsists on a few sycophants to avoid snuffing out completely. He has no real mind left; just the driving goal of his core function—the creation of portals—and so he wanders Midgard, providing his unique talent to any he comes across. Many merchant caravans have crossed whole continents in the blink of an eye. But the Doorlord is not picky when it comes to his customers. Thieves, saints, warlords, commoners—it does not matter to him.

Those who come upon Hune the Doorlord might hear his harsh whispering voice ask them a single question: “Door?” If they answer in the affirmative and pay the Doorlord’s price, they can request passage to anywhere. His price for this service is somewhat random. It is always something the requester has on hand, but it varies from person to person. Sometimes it is a precious magic item, other times a bit of rations or a pint of blood. No one knows to what purpose the Doorlord puts these items, and most find it’s best not to ask. The portals themselves last only for as long as it takes the requester and his companions to enter, and passage is a one-way trip. Locked rooms, forbidden fortresses, great distance, magical defensives—nothing can block one of the Doorlord’s portals.

The Doorlord’s influence can be felt not only in the history books, but also in the current age. A number of scattered groups pay homage to Hune. The Cult of the Gaping Door in the Grand Duchies believe that nothing should be closed or secured and take fanatical pride in burglarizing the homes of the wealthy simply to unlock their doors, chests, and safes. The small Temple of Passage in the Crossroads promotes magical transportation and offer teleportation services for astronomical fees. There is even a pirate in the Western Ocean named Captain Bartholomew Wayfen, whose ship, the Open Passage, sails under the flag of the unlocked door.

Hune the Doorlord can be encountered anywhere on Midgard. He follows no pattern and simply appears and disappears according to his own mysterious logic. Some say he is drawn to those who desperately need a passage and it is true that many of the stories surrounding the Doorlord concern those who greatly desired faster travel or access to the inaccessible. Other scholars contend that Hune is searching for something to rekindle his godhood; some hidden artifact that if found could breathe new life into the ember that is the Doorlord and rekindle the rebirth of the God of Portals.

For the few lucky enough to partake in the Doorlord’s services, the passage through his portals is not always easy. He is immortal, but not as powerful as a full-fledged deity, and because of that his transports sometimes go awry. Refer to the following table for portal results:


We hope that Hune becomes a part of your gaming enjoyment. To add more tales to your game, please venture over to the Midgard Tales Kickstarter page and consider becoming a backer!