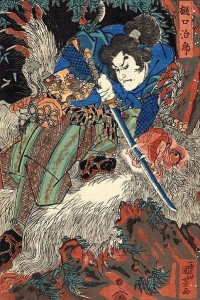 This haggard-looking book bears a nondescript jacket of sturdy leather, the pages between filled with austerely elegant elven script. It appears to be a combat manual passed from a powerful elven mage-warrior to her much younger niece, an aspiring sorceress. Among the strict and detailed mandates that concern diet and training regime, there are several spells.

Not simply a spellbook, however, this combat manual describes techniques both physical and arcane. Indeed, the author appears to have viewed them as one discipline, and her use of martial lexicon to describe magical concepts (or vice-versa) seems intentionally obtuse at times. Using this book requires a DC 25 Spellcraft check, to which characters proficient with all martial weapons gain a +5 bonus. It requires 2d4 hours of study to make one check, and taking 10 or 20 takes proportionally longer…

“How absurd that your parents no longer permit me to train you in person! I suppose I should thank the stars that my father wasn’t an elflord; I certainly wouldn’t have gotten far as a lass had no one been allowed to break my nose. And you’ve no place sulking at me yourself, either! Had I been an earnest foe rather than a sparring partner I’d have struck with the blade, not the pommel. Since you were big enough to climb onto my knee you’ve said that you wanted to be a warrior. A dream at odds with the spoiled princess you’ve become, but a dream I believe yet lives. If your stubborn mother would lend you out for a decade, I’d turn you into a creature to be reckoned with, but as I am deprived of your company, a book will have to suffice.

Don’t mistake this for light reading to be enjoyed before meditations, however…”

When casting this spell on a weapon, you recite the name of an intended target. As soon as the weapon succeeds in dealing damage to its target, this spell is activated, causing the attack to deal 1 additional point of damage per caster level (max +10).

If the target saves, the spell is simply discharged; otherwise, the wound becomes a permanent effect, and the target finds it impossible to heal any damage dealt by the cursed blow by any means for as long as he remains within 1,000 ft. of the affected weapon. A target that flees this area may heal normally, but the wound leaves a visible and painful scar which violently re-opens should the weapon come within range of him again.

Track the damage from the cursed wound separately from other damage, and apply any healing to it last. Any such damage that the target heals or recovers is instantly re-inflicted should he come within range of the weapon (and cannot be healed until the target escapes the area again).

Dispel magic has no effect on this spell. One may break this curse by casting remove curse on the weapon, or by casting break enchantment on either the weapon or the victim.

No caster may have more than one cursed wound spell (activated or not) in existence at the same time.

This spell is cast as a swift action just before making a melee attack on your turn: a whiplash of invisible energy rends the air and carries the force of your blow far beyond your reach.

Make a single attack roll as normal, but rather than only striking one creature you threaten, the attack is resolved separately against all creatures (or unattended objects) within the area. Flanking or high ground bonuses, damage expressed as extra die, and critical hits only apply to targets whom you threaten normally. Otherwise, use the same attack and damage roll for all creatures in this area.

This spell is cast as a swift action immediately after making a melee attack roll. If the attack succeeded, your target thinks that you actually missed (feeling no pain from the blow). If the attack missed, you create the illusion that it hit (even rolling normal damage, to determine how hurt the target believes it is). In either case, the spell gives the target a false impression of its own hp total for the duration, but has no effect on its actual hp.

An enemy affected by a phantasmal hit may waste healing or retreat prematurely. Further, if imaginary damage exceeds its current hp, the target must make another save or fall unconscious until healed (or until this spell’s duration expires), as if it had been incapacitated by real damage.

An enemy affected by a phantasmal miss may retreat too late (fighting on as if unhurt), and won’t be aware of an attack’s side effects, if any. For example, a foe struck with the Scorpion Style feat may waste an action trying to move across the room and would be surprised to learn that it can’t (but remember that any character who finds evidence contradicting an illusion gets a new saving throw to disbelieve).

You imbue the affected weapons with sonic energy, causing it to vibrate with a low hum. Each time either of these weapons strikes a foe, it deals 1d4 extra sonic damage plus however many d4 were last dealt by its partner weapon during any given attack in the last round.

For example, if this spell were cast  on a fighter’s sword and a rogue’s knife the fighter’s attack would deal +1d4, after which the rogue’s next hit (or hits) would deal +2d4, the fighter would deal +3d4, and so on, until the damage cap (+1d4 per two levels, maximum +5d4) was achieved or until either weapon failed to land a hit for a full round and reset the damage to +1d4. The weapons need not be employed by different characters.

Blows with the affected weapons are accompanied by a loud ringing sound, shrill and lingering, which increases steadily in pitch.

This spell must be cast while standing on soil or stone: a rock hilt appears at your feet, and by it, you draw a sword made of quartz-veined granite from the earth. This weapon is sized appropriately for the caster (though this spell does not grant proficiency) and functions exactly as a +1 longsword, with an additional +1d8 bonus to damage per two caster levels (max +5d8).

In addition, each round you may choose a single 5-ft. square (adjacent to the ground and within 50 ft. of you) as a free action at the beginning of your turn. When you thrust your sword into the earth, it slips as if into water, and its blade thrusts up from the ground at the chosen point, mirroring your movements perfectly. You may make attacks with the stoneblade (even attacks of opportunity) into that square exactly as if you threatened it normally.

The stoneblade only functions for you; in the hands of anyone else, it is simply a nonmagical longsword.

Energy Gushing An energy gushing weapon must also have an “energy” property (i.e. frost or flaming burst). Its wielder may consume one spell slot as a swift action made just before rolling an attack. On a hit, the attack deals +1d6 extra energy damage per level of the spell slot sacrificed, in addition to its normal bonus damage. On a miss the spell slot is wasted.

When using a punch or hand-strike to deliver a touch spell, you harness the spell’s energy to lend crushing force to your blow.

Benefit When you deliver a touch spell using an unarmed strike, you gain an enhancement bonus to your unarmed attack and damage roll equal to the level of the spell in question. This technique has no effect on normal melee touch attacks.

The magic that you drape about your foes calls out to that which you invest in your blade, guiding it as you strike them down

Benefit When attacking a foe who is under the effects of a spell that you cast, you apply your bonus from Arcane Strike to attack as well as damage rolls and reduce by half any miss chance (such as from darkness or the blur spell) imposed on that attack.

You are skilled at casting touch spells quickly in combat, employing them freely amid other attacks.

Benefit Once per round, when taking the full-attack action, you may cast one melee touch spell with a normal casting time of 1 standard action or less as a swift action instead. However, you cannot also deliver the touch as part of that swift action; you must “hold the charge” for at least 1 round.

You can cast your spells into weapons, allowing them to be discharged as part of an attack.

Benefit You can modify any targeted spell with a casting time of 1 standard action or less so that it may be stored in a melee or thrown weapon exactly as though that weapon has the spell storing quality. An invested spell takes up a spell slot one level higher than the spell’s actual level.

You cannot regain the spell slot used to cast an invested spell until the original spell is discharged, dispelled, or dismissed. A weapon cannot hold more than one invested spell at any given time. However, you may use this feat to store a second spell in a weapon that already has the spell storing quality (though you can’t unleash both spells with the same attack).

By keeping your off-hand free, you enjoy superior balance and coordination compared to most dual-wielders.

Benefit When using an unarmed strike as your off-hand attack, you gain a +1 bonus to attack rolls with both weapons (which will usually improve your penalties to -1/-1). You may make one additional attack of opportunity per round, provided that this attack is an unarmed strike.

“Skipping to the end again are we?

When you first read this you won’t understand a single incantation of what comes before, and when you last read it, you will do so fondly for it will all be child’s play to you. Of this, I am perfectly confident. But know that lore alone cannot turn a delicate lady into a hardened warrior.

The greatest difference between you and I is not my years or my talents, not the shock white of my hair nor the great blade at my side. The difference lies in the trials I have bested, in pain and in terror, in trials you will not find nor face until you have left home and birth behind.

May you grow into as magnificent an ally and as dreadful a foe as ever I dreamed of becoming,

(Quickly scrawled inside the back cover:

“And if you the reader are not my darling Ahlonania, if I write now to some thief or ruffian who has deprived her of the fruits of my labor, then flee or flee not as you prefer. I will find you.”)

Boot to the head! Do you want to see more PC-oriented material here in the future?