Skip to content
Home / Delve into the Depths in the Kobold Blog / KotM Fight! Treacle 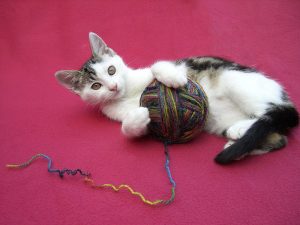 Welcome to the King of the Monsters Contest finals: the treacle is finalist 8 of 10. These submissions are left almost entirely as they were received with the exception that all submissions have had minor alterations for proper spelling (not grammar), formatting, and the addition of an image. Let the fight commence!

Nerves steeled against the horrors of impending combat, you almost feel a pinch of disappointment to discover that the shuffling noises came not from a beast, but instead a small kitten with an injured paw. It looks up at you in fear and surprise and mewls softly…

TACTICS
Before Combat Immediately upon detecting prey, they use their Reshape ability to assume a nonthreatening form. Afterwards, they mewl or sing to attract attention.

During Combat Treacles prefer to drain blood slowly and subtly, ideally while their prey sleeps or is paralyzed.

SPECIAL ABILITIES
Blood Drain (Ex): Once a Treacle has skin-to-skin contact, it can slowly siphon blood from its victim. Blood drain inflicts one point of Con damage every 30 minutes. Thanks to the treacle’s natural poison, this blood drain is subtle, requiring a DC 20 Will save to notice. The victim in allowed a new save every time a point of Con is lost.

Charming Presence (Su): Treacles radiate a faint aura of divination, and have the uncanny ability to sense and mirror emotions. This often gives them the illusion of rudimentary cunning, though all they actually do is show what an observer thinks they’ll see. Treacles use Disguise to oppose any Sense Motive or Knowledge skill checks made to see through their ruse.

Poison (Ex): Treacles excrete a mild anesthetic. Like their Blood Drain, the poison is subtle, requiring a DC 20 Will save to even notice the effects. Contact. save Fortitude DC 13; frequency 1/round for 4 rounds; effect 1d4 Dex. The save DC is Constitution-based.

Reshape (Ex): Treacles can assume new forms easily. Being an extraordinary ability, spells such as true seeing will only reveal the Treacle’s mild aura of divination, not their true form. A reshaped Treacle gains the movement methods of it’s new form, but no other special qualities, and can only assume the form of creatures or objects its own size. Reshape grants the ooze a +10 bonus to the Disguise skill (already factored in the their skills, above).

As mindless oozes, treacles cannot reshape consciously. Instead, they assume their forms based on what the nearest creatures finds non-threatening or appealing. They generally hold a shape for several hours once assumed, even if their original victim is no longer present.

A curious bunny, an abandoned infant, or a delicate songbird can spell slow and agonizing death for the unprepared. Beneath any of these facades may lurk a treacle waiting to feed on a gullible victim. Whether by natural selection or arcane tampering, these compact oozes prey on kindness.

Treacles feed on blood but lack natural weapons or the acid of larger slimes. To survive, prey must welcome and embrace them, unaware of the threat. Their soft bodies absorb psychic impressions and take the shape of whatever nearby creatures find least threatening. In the wild, treacles assume the form of an animal’s offspring to lie close for several hours. Among humanoids, this ability manifests by transforming them into pets, infants, or injured animals. In the most horrific cases, these oozes even transform into children’s toys.

Once sated, treacles detach from their host and find a cool, dark place to digest. Provided with suitably large and receptive prey, they instead remain in place and eventually divide into two fully-grown oozes. Rarely, a mutation will prevent mitosis, and the sterile treacle will instead grow in size. The largest mimic human children and the elderly.

Being mindless, treacles cannot act or plot. They simply move towards a food source. Their sensitivity allows them to react as their target might expect, but they cannot speak or otherwise behave intelligently. This keeps their numbers low in civilized areas. Still, one undetected treacle in a village can easily grow into dozens and decimate the population.

Treacles are small, less than six pounds. Their natural forms, on the rare occasions they are glimpsed, are pale and iridescent, like oil on fresh milk. After feeding, treacles take a deeper brown hue, though remain glossy and opalescent.