Skip to content
Home / Delve into the Depths in the Kobold Blog / Howling Tower: Here Be Dragons 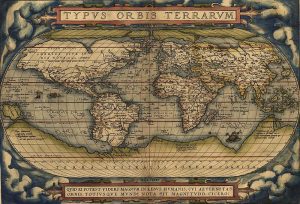 Is there a roleplayer or a DM who doesn’t love maps?

My dad once told me a story about a man who was investigated by the FBI during WW2, on suspicion of being a spy. Neighbors grew suspicious because he had boxes filled with maps in his house. It turned that he was a longtime subscriber to National Geographic, and he kept all the maps from the magazines in one place.

I’m a map collector, too. Mine are stuffed into file drawers. Many of them are from National Geo, but there are maps from state and national parks, amusement parks, museums, telephone books, race tracks, restaurants, wargames, D&D campaigns, and computer games. There are road maps, terrain maps, cave maps, floor plans, and deck plans. Maps of the Moon, the planets, the night sky, and the ocean floor. Maps created by level and theodolite, and by imaging satellite. Maps of places I’ve been, places I’d like to go, places that don’t exist anymore, and places that never existed. Maps that I bought, drew, downloaded, or just found somewhere.

A few months ago, someone broke into my car and tried to steal it. They couldn’t get the car started, but guess what one thing they took—a road map of Washington from the glove box! That’s my kind of scum.

Maps speak to us. Our brains work much like maps. “Mindmap” is the name for a type of diagram that helps people to recognize and organize connections between ideas. It’s no coincidence that “map” and “plan” are synonyms as both nouns and verbs, or that the earliest known maps are painted on cave walls.

There was a time in ages past when a reliable map was considered among a nation’s most valuable and strategic treasures. People devoted their lives to filling in the blank spaces with something more meaningful than “here be dragons,” and many of them died to extend the ink on the parchment by a few more pen strokes.

Maps are essential to knowledge. We draw maps because without them, our understanding of the world is vague at best. A map can present a bewildering amount of information in a way that is instantly, intuitively understood.

When you sketch a map of a dungeon, you are responding to the same impulse as Ptolemy when he compiled his Geographia, as J. R. R. Tolkien when he drew the first maps of Middle Earth, as Robert E. Howard when he sketched the outlines of Earth during the Hyborian Age, and as that early hunter who preserved his knowledge of his surroundings in an image on a cave wall.

A map does more than keep you from getting lost; it conveys a sense of your place in the world. “You are here” is not a comment on where your feet are. It’s an existential declaration.

These are the reasons why I love maps and why I consider them vital to a roleplaying game.  Players can hold a mapped world in their hands and in their heads. A world without a map is literally ungrounded. A map makes it real.